22-year-old Josh Cabban has won the largest tournament of his short four-month pro by taking out the 2015 South Pacific Export Papua New Guinea Open on Sunday.

Tied with Kristopher Mueck heading into the final round, Cabban opened up a comfortable gap over the opening nine, holding a three-shot lead over Daniel Fox with nine holes to play. 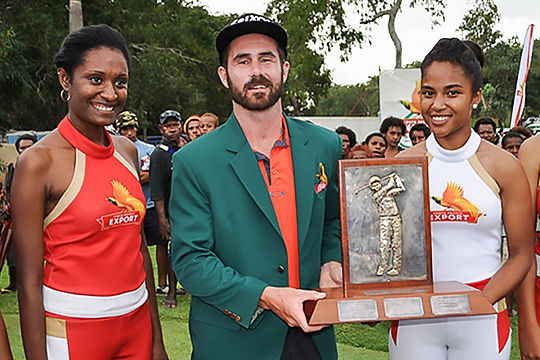 Cabban remained solid over the back nine and virtually sealed the win with a birdie putt at the 16th, opening up a four-shot lead with two holes to play.

Despite three putting for bogey on the 18th, Cabban carded a final round 71 to finish on 12-under par, four shots ahead of Fox who finished in outright second with Josh Younger alone in third at 7-under.

“This isn’t a position that I have found myself in before, so I am quite speechless to have walked away with the win today,” Cabban said.

“I had a chat with a few of the other professionals this morning and one said to me, out of those in the final group I am no doubt the least expected to win today, so go out and play like it. I did and I guess the proof is in the victory,”

“When you look at the names of previous winners on the trophy, I am very honoured to add my name to it. It is quite ironic that the winner receives a green jacket given I lost all of mine in the blue mountain fires a couple of years ago, this jacket will certainly be cherished forever.”

Prior to turning professional, Cabban worked as a carpenter for his father before taking the plunge into professional golf. The $27,374 winner’s cheque would provide him with plenty of assurance that he has made the right decision.

“I love being a chippy though it was never something I really intended to do my entire life. After tasting victory today, it is something I could definitely get used to and although it’s far more nerve racking, it is far more enjoyable than being on the tools.”