Gribble, in just his eighth start on the PGA Tour, finished at 20-under with compatriots Chris Kirk (70) and Luke List (70) and Englishman Greg Owen (68) equal second on 16-under. 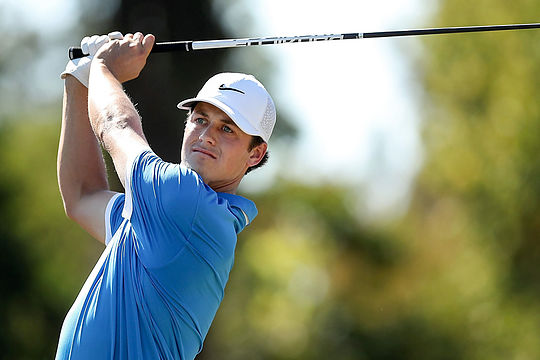 The 26-year-old rookie from Texas started the day a stroke behind playing partners Kirk and List, firing two birdies on the front nine to stay in contention before running off a string of birdies on Nos. 11, 13, 15, 16 and 17 to cement the victory.

“I knew I was in a good spot and I knew I was playing well,” said Gribble. “It’s hard not to sit there and look at the scoreboard, look where you’re at and how you’re doing.”

Gribble played in college at Texas State and is the second member of the Longhorn’s 2012 national championship team to win a PGA Tour event. The other is Jordan Spieth.

After an impressive 2016 season on the Web.com Tour, Gribble earned his PGA Tour card for the 2016-17 campaign and he has already taken advantage of the opportunity by finishing tied for eighth at the Safeway Open in the season’s first event.

During the 2016 Web.com Tour season, Gribble finished 40th on the priority list to secure his 2016-17 PGA Tour card following six top-25s in 24 starts. His season was highlighted by two top-five performances, including a runner-up finish at the United Leasing & Finance Championship.

In securing his maiden PGA Tour victory last Sunday, Gribble earned US$756,000 and 300 FedExCup points, plus exempt status on the PGA Tour through the 2018-19 season.

Cameron Smith finished the best of the Aussies in a tie for 11th position with Rod Pampling and Cameron Percy finishing in a tie for 42nd. Greg Chalmers rounded out the top-50 with Robert Allenby and Stuart Appleby at the tail end of the players to make the cut.