The 22-year-old from England won the Investec South African Women’s Open on her first start as a rookie member of the Ladies European Tour at Westlake Golf Club on Saturday, coming from three strokes behind the overnight leader, Olivia Cowan, to win by a shot. 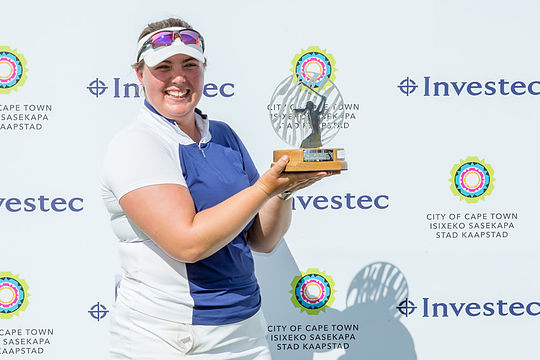 “Everyone was already here and there is a very low risk here so it was nice to be able to play some golf, because we don’t know how long it’s going to be now before we will again.”

“I couldn’t have hoped for a better start. It feels absolutely incredible and it really is a dream come true. Growing up as a kid, all I could ever dream of was playing on the Ladies European Tour and to come and win my first event, the feeling is indescribable,” said Hewson, who turned professional in September and finished fifth at LET Q-School in January.

Hewson birdied the first hole in the final round and although she bogeyed the third, she quickly clawed another shot back on the fourth hole, moving to five-under-par.

She entered a four-way share of the lead after nine holes and then took the sole advantage after the three players in the final group bogeyed the 10th hole.

With a bogey of her own on the 11th, she dropped back into a share of the lead but then broke away from the pack with a birdie on the long 13th hole and the rest of the field was unable to catch her.

Hewson finished a stroke ahead of Sweden’s Emma Nilsson and South African Monique Smit, who both recorded career best finishes of second on the LET.