Rookie Smylie Kaufman, playing in only his fifth PGA Tour event, fired a final round 10 under par to win the Shriners Hospitals for Children Open in Las Vegas.

Kaufman, 23, started Sunday’s round seven shots behind the overnight leaders yet fired eight birdies and an eagle to finish on 16 under. 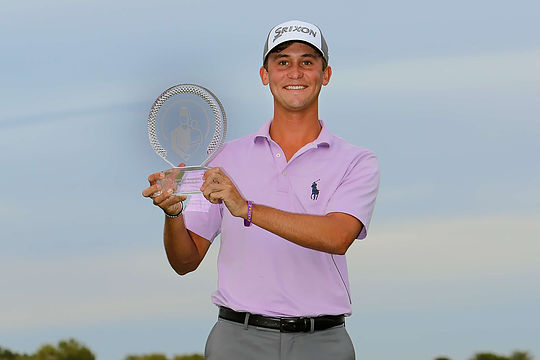 Ranked 266th in the world, Kaufman secured a two-year exemption on the main tour and a spot in next year’s Masters. He also gets into the PGA Championship, the Hyundai Tournament of Champions at Kapalua and The Players Championship.

“Its unbelievable,” said Kaufman, whose closing 61 is the lowest final-round score by a PGA Tour winner since Tommy Gainey shot a 60 at the McGladrey Classic in 2013.

American’s Patton Kizzire, Cameron Tringle, Jason Bohn, Kevin Na, Brett Stegmaier and Germany’s Alex Cejka finished in a tie for second a stroke behind at 15-under.

Kaufman had finished his round two hours earlier as he watched all the challengers move on to his clubhouse lead. Neither of the six could pass his mark.

“It was so stressful watching it all come in,” said Kaufman.

“I dodged a lot of bullets coming down the stretch with guys coming. I was just hitting it so good the last few days and just wanted to give myself a chance and post a number, and that’s what it came down to.”

John Senden finished the best Australian at 10-under for a share of 16th position. Steven Bowditch made the cut but a third round 83 saw him miss out on the final round.

Geoff Ogilvy, Stuart Appleby, Rhein Gibson, Robert Allenby and Cameron Smith all missed the weekend in what was another poor week for the Australians on the PGA Tour.