South Korea’s A Lim Kim produced one of the most memorable finishing challenges in US Women’s Open history, birdieing the last three holes in a weather delayed final round at Champions Golf Club in Texas to win by one stroke over fellow countrywoman and world number 1 Jin Young Ko and American Amy Olson.

The championship had to be completed on Monday due to torrential rain that saturated the Cypress Creek Course on Sunday. 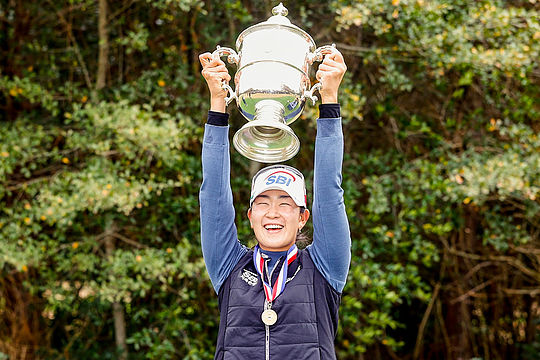 A Lim Kim holds the US Open trophy (Credit: USGA)

Kim is the fifth player in US Women’s Open history to win in her debut, and the first since In Gee Chun in 2015.

Kim, 25 and ranked No. 94 in the Rolex Rankings, started the week among the 41 first-time US Women’s Open competitors in the field. She has won twice on the Korean LPGA tour.

“I got a lot of text messages from my family and friends how well I played,” said Kim through a translator. “They were cheering for me overseas. I actually came to winter training [in Palm Springs, Calif.] four years ago. That was my first time in the US, and this is the second time, and first time playing in an overseas tournament.”

Papp started the day tied for fifth, four strokes off the lead. She closed with a 3-over 74 to finish tied for ninth and receives an exemption into the 2021 US Women’s Open at The Olympic Club next June.

What’s In The Bag: A Lim Kim

Ruffels fired six birdies in her final round of 70 to move up the leaderboard to finish in a share of 13th position to finish the best of the Australians at 5-over. The result giving the 2019 US Amateur champion plenty of confidence moving forward.

“I played pretty well today,” said Ruffels. “I was really, really happy with the round. It was definitely one of the tougher days, conditions-wise, especially this morning it was pretty cold, warmed up a little bit.”

“I feel like any time I can kind of mix it with the pros and know that I can compete against them it’s a great week. I feel like I did that this week and just gained a lot of confidence.”

This was the 75th staging of the championship and in a year full of challenges. It’s important to keep in perspective the six month delay and the fact the championship was contested on two golf courses for the first time because of the shortage of daylight in December, not to mention the weather issues as Texas heads into its winter and a Monday finish.