Rising star Curtis Luck is the latest high-profile name to commit to next week’s Nexus Risk TSA Group WA Open after confirming that he would defend his title at Royal Perth Golf Club.

Luck won the WA Open title as an amateur last May and, after returning to Perth earlier this week following his rookie pro season in the US, said he was looking forward to playing in front of his home crowd. 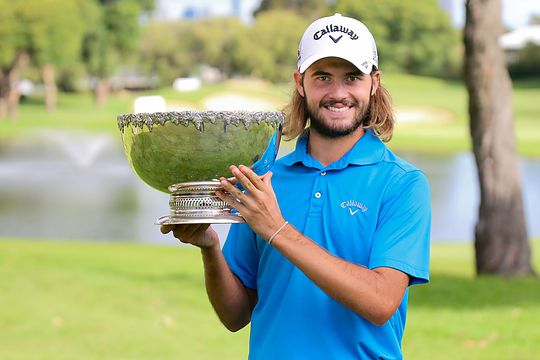 “This tournament kick-started so many good things for me last year,” Luck said.

“I’m super excited to be at home and luckily I’ve timed it perfectly to play in the WA Open and hopefully defend (his title) next week.”

The 21-year-old’s victory at the WA Golf Club last year proved the catalyst for a whirlwind 18-month period that catapulted the Cottesloe member’s name onto the world stage.

Luck won the US and Asia-Pacific Amateur titles – the most prestigious events outside the paid ranks – before narrowly missing out on winning the Silver Cup as low amateur at the US Masters.

He then immediately turned professional, as the world’s top-ranked amateur, to play on the PGA Tour where he underlined his class with a fifth-placed finish at the Quicken Loans National in July.

And while his rookie season failed to finish as he hoped, after missing out on a PGA Tour card for next season via the Web.com Tour Finals, Luck believes returning home could be a blessing following his relentless schedule.

“At the start of the year I probably hoped that this wasn’t going to be the case but you know what it’s absolutely awesome to come back,” he said.

“I’ll be home for a while now. I’m looking forward to spending time with family and my coach and everyone.”

“Over these next few months I’ll hopefully have a bit more of a schedule down and take some time to breathe and assess how this year was for me.”

This year’s WA Open field is highlighted by ISPS HANDA World Super 6 Perth champion Brett Rumford, who leads the PGA Tour of Australasia Order of Merit, and who’ll benefit from playing on his home course.

Luck also knows his way around the tight fairways of Royal Perth, having been a member for the past two years before heading off to the US.

“I obviously grew up playing at Cottesloe and there are a lot of similarities between the two, but I was also a member at Royal Perth for a while,” he said.

“I’ve played it plenty. I’d always practice and play at Cottesloe but I’d play a couple of rounds a week at Royal Perth.”

The WA Open is also set to feature Hannah Green, who will take on the men at Royal Perth, after her outstanding rookie season in the US.