Phil Mickelson has won for the third time in four career starts on the PGA Tour Champions, closing with a 4-under 68 on Sunday for a two-shot victory in the Constellation Furyk & Friends.

Mickelson, the current PGA Champion and six time major winner, birdied two of his last four holes to hold off Miguel Angel Jimenez and finish the event at 15-under to claim the title.

“I think to be able to win a tournament that Jim and Tabitha have started and the way I look up to them and respect them and the hard work they’ve put into making this tournament unique and special…it’s fun for me to come out on top,” said Mickelson.

Over the last 12 months Mickelson’s Champions results rank among the best to ever play the tour. He’s played 12 total rounds and held at least a share of the lead in seven of them. Eleven of those rounds have been under par.

“It’s a good start. I’m having fun,” said Mickelson about his debut season on the PGA Tour Champions. “I’m enjoying being around the guys, I’m enjoying the golf courses and playing fewer holes and being able to play aggressive, kind of like the way I like to play.”

Mickelson earned US$300,000 and moved to 24th on the PGA Tour Champions Schwab Cup standings. There is one more event left in the tour’s regular season, next week’s SAS Championship in North Carolina.

The playoffs will end with the Charles Schwab Cup Championship at the Phoenix Country Club, starting 11th November. 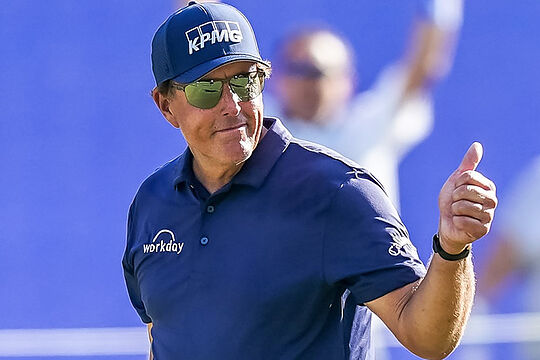 Steve Flesch birdied two of his last three holes, including a 17 metre putt on the last, to finish outright 3rd at 10-under. Tournament host Jim Furyk, Ernie Els and Cameron Beckman tied for fourth at 9-under.

Rod Pampling finished the best of the Australians in a share of 38th position a final round 74 dropping him 21 places down the leaderboard. Stuart Appleby also had final round troubles firing a 77 to fall 32 places into a share of 46th position.

Kiwi Steven Alker, a four-time winner on the Korn Ferry Tour, once again finished in the top-10 – his sixth straight result in his first season on the Champions Tour.

The 50-year-old has carded a 3rd, 5th, three T7′s and a 9th to make more money in the past couple of months than he has in the last five years on the Korn Ferry Tour.