Troy Merritt would have thought he already had one hand on the the trophy as he headed to the back nine at the Montreaux Golf and Club on Sunday.

However, rookie pro Collin Morikawa had other ideas as he fired off five birdies across the final nine holes to win the Barracuda Championship in Reno, Nevada in his just his sixth start on the PGA Tour.

Morikawa’s total of seven birdies and no bogeys gave him 14 points under the modified Stableford scoring system, which was enough for a three-point victory over Merritt with with 47 points.

Merritt didn’t give up the fight easily and almost forced a playoff at the final hole where he had the chance to sink an eagle for the win.

Unfortunately for the two-time PGA Tour winner, he left his chip about four metres past the hole and then missed the birdie coming back.

“It was something really special to finally get the win,” Morikawa said.

“It felt good to make that putt (at 17), but obviously I had one more hole to play. There was a lot of points on the board left, and I knew I had business to do on 18. And I hit three good shots and was able to tap in for birdie.” 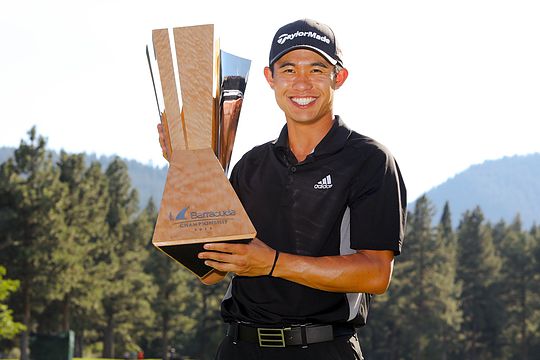 While the 22-year-old had already played well enough in five starts to earn a PGA Tour card for next season, this win means he will immediately gain a full PGA Tour card and will move to 46th place in the FedExCup , earning him a start in the Playoff Series.

Robert Allenby was the sole Australian to make the cut in 67th place, his first since late February this year.