South Australian Brad Moules leads a PGA Tour of Australasia tournament for the first time after his opening round at the South Pacific Export Radler PNG Open.

Having completed the PGA of Australia’s Trainee Program at Royal Adelaide Golf Club, Moules turned his attention to Tour golf and gained his card via Qualifying School. 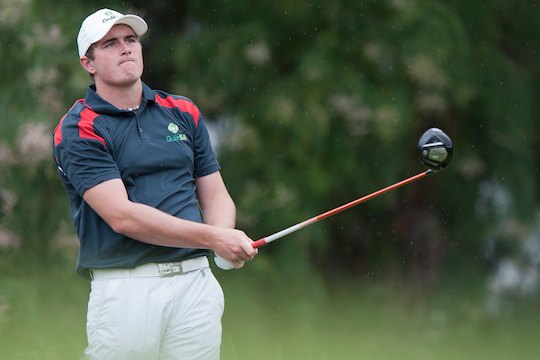 With a solid base under him, Moules is delighted with his performances early in his Tour career.

“I completed my PGA Traineeship at Royal Adelaide but I always wanted to come out on Tour,” said Moules.

“I got my Tour card this year and I have had a nice start to the year. I have had a couple of top-25 finishes in the big events, and I am playing well here.”

“Completing the Traineeship taught me about the little extras that you need to do, what I can achieve and what needs to be done to make it happen. So far it’s holding me in good stead.”

A hot putter was to thank for Moules’ performance which featured an eagle, five birdies and a lone bogey.

“Very happy the putts fell…it’s good to get off to a nice fast start,” added Moules.

“I think playing last week in Lae was the key, I was able to get my head around things and so it all fell into place,” added Moules

His round of 6-under 66 sees him hold the overnight lead at the South Pacific Export Radler PNG Open.

“I am first off tomorrow morning, so it gives me more time to sleep tonight and enjoy the lead.”

“Leading is a new experience so hopefully I can stay relaxed, come out tomorrow and stick to my game plan. I hope the putter stays hot too.”

Moules sits on top of a leaderboard that is full of fellow young Professionals looking for their first PGA Tour of Australasia win.

Sitting one shot back is Queensland rookie Cory Crawford and New South Welshman Daniel Bringolf whose round was highlighted by an eagle at the par-5 15th.

“I got off to a hot start and played quite nicely but gave back a few late. That’s just the luck of the course, I had a couple of bad bounces but I got a couple of good ones as well so I can’t complain,” said Crawford.

“I hit a pretty good drive down the left and had about 200 metres in for my next. I hit a solid shot, just short left of the green and managed to hole the chip which was pretty good,” said Bringolf who is hunting a win this week to ensure he receives starts for the remainder of the 2016 season.

Amateur Anthony Quayle travelled to Papua New Guniea in an effort to gain Professional tournament experience and opened with a 4-under 68.

“I didn’t have a bogey all day so it was four birdies which was nice. I definitely gave myself a lot of opportunities…I just couldn’t convert all of them. That is pretty normal and I am still happy with what I had,” said Quayle.

“My goal this year is to play as many Professional events as I can to make that transition into the professional ranks a little easier.”

Quayle is joined on the leaderboard in a tie for fourth with another two Tour Rookies Tae Koh (NZ) and Lindsay Wilson (NSW) as well as Damien Jordan (QLD).

Rounding out the top-10 on 3-under the card after the first round are Tom Bond (SA), Kristopher Mueck (VIC), Mitchell A. Brown (NSW) and Kota Kagasaki (QLD).

The second round of the South Pacific Export Radler PNG Open tees off at 7am with Moules on course in the first group off the 10th.