Scottish lefty Robert MacIntyre brilliantly emerged from the mental strain of the coronavirus lockdown to capture a maiden Tour win with victory in the Cyprus Showdown at the Aphrodite Hills Resort.

MacIntyre, 24, went within inches of an ace at the 17th and then also birdied the last in posting a 7-under 64 to win by a shot from Japan’s Masahiro Kawamura (65). 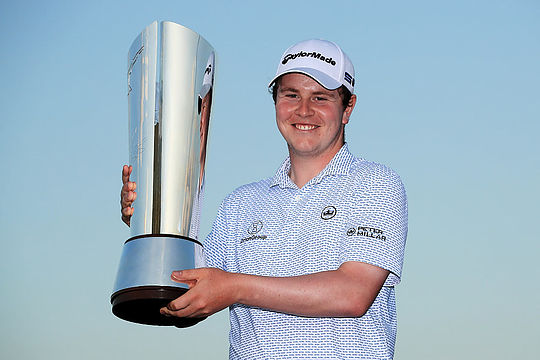 The Scot had finished runner-up on three occasions last year on his way to being named ‘Rookie of the Year’ and he’s finally broken through for a first victory toast in just his 45th Tour event, and in process, MacIntyre’s created Tour history in becoming the first Scottish-born lefty to win on Tour.

It was an emotional MacIntyre in accepting the gleaming silver Cyprus trophy.

“It’s unbelievable and it’s what I’ve dreamed of as a wee kid.”

“I’ve been watching Scottish Open’s held at Loch Lomond and then finally to play on the Tour, and giving myself a lot of chances to win last year.”

“But it’s been a tough lockdown for me and the family but with the support of my family I have coped mentally and just to come through this week is amazing.”

His final round was a mix of eight birdies and it could have easily been more in missing two to three other chances over his inward half.

MacIntyre is the 25th Scot to win on the Tour while earning a £18,000 first prize cheque that sees him move to 25th on the Race to Dubai and also jumping from 91st to a career high of 62nd on the World Rankings.

He had ended 2019 in 65th place in the rankings to miss out on this week’s Masters but he’s now determined more than ever to end 2020 inside the top-50 to secure a maiden Augusta tee time next April.

“It’s been my goal since I first started playing. I know the level of golf that I am expecting myself to play, and my team is also expecting me to play but I just wasn’t quite there.”

“I just have to set my standards really high and I know if I can do that I’m sure a top-50 on the rankings will take care of itself.”

MacIntyre arrives back to his hometown of Oban with a trophy that will now take pride of place in his recently-purchased bachelor pad.

He said: “I’ve just started to do up the apartment a little bit, particularly in the living room, so there will be a nice spot for the trophy.”

With Jason Scrivener retiring following the opening round, Maverick Antcliff was the only Australian to make it onto the scoreboard this week finishing in a share of 41st place in the elimination format.

The lowest 32 scores after the first two rounds progressed, however, their scores are reset. Following the third round, only the the top 16 players qualify to play on Sunday with their scores again reset for the final round.

The European Tour now heads to the US for the rescheduled Masters tournament on Thursday while most players will tee it up next time in South Africa at the Joburg Open on November 19.