Perry fired rounds of 72, 66, 71 and 68 around the Open Course for a total of 11-under 277 to win by three shots from Queensland’s Kade McBride and New Zealand’s James Anstiss, who will be ruing a costly second round 74. 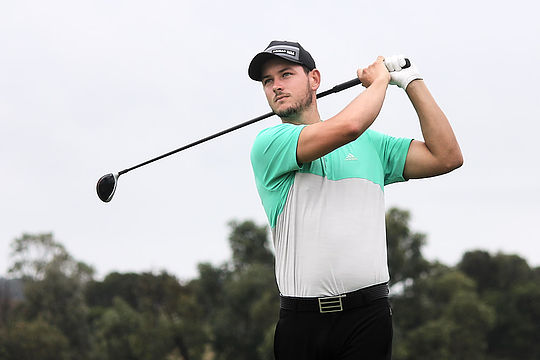 “This is awesome. I am very relieved. It has been a long few weeks so I am very stoked,” said Perry.

“I was playing well towards the end of the year so I knew that I was in with a decent chance this week if I did the right things and played the course the way it should be. I did that so it paid off for me.”

“Today I had a steady start with eight pars, but then I birdied the 9th which got it rolling into the back-9. I made a couple of early birdies there and had some momentum. I played strong coming in over those final three holes which was enough to get it done.”

The 23-year-old, who only recently turned pro, now has full status in Australia as well as limited status on the lucrative Japan Tour after surviving four stages at Q-School last week.

Perry enjoyed a successful amateur career prior to making his professional debut at the recent NSW Open at Twin Creeks, where he finished third, to secure a substantial first pay packet.

Prior to turning pro, Perry finished runner-up at the 2017 British Amateur after finishing top 16 in 2016. He also won the 2017 Riversdale Cup along with the 2016 Victorian and Queensland Amateur titles.

2019 is shaping up to be a big year for Perry and will be looking to get his season off to a great start when he tees off in the $3 million Vic Open, which is co-sanctioned by the Australian PGA Tour and European Tour.

“Everything will all depend on Japan. The Vic Open is the first event we have in Australia and that is a big one so that will be my first event,” added Perry.

“All the co-sanctioned stuff in Australia is getting better. It provides more access for us, especially with the European Tour.”

“If you finish well in those tournaments it can skyrocket your career pretty quickly so it’s very exciting to now have the opportunity to play those events.”

Aaron Townsend (NSW) and Taylor MacDonald (QLD) rounded out the top-5 on 7-under.

Former US PGA Tour player, Nathan Green, who is now living back in Australia finished in equal 6th place at 5-under to easily achieve his goal of gaining Australasian Tour status to add a few tournaments to his coaching schedule.