Starting two strokes behind third round leader, Rhein Gibson, an impressive bogey free final round 4-under-68 saw Felton finish with a tournament total of 13-under. 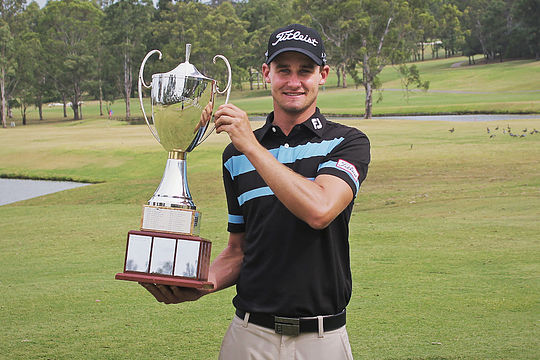 “It was great to finish the tournament without a bogey in the final round and to get my first win,” said Felton, 20.

“I felt comfortable out there and was really impressed with the way I handled myself with the situation. I kept making pars and birdies and I just kept it going along.”

The win is significant for Felton who prior to Sunday’s victory had no playing rights and had entered the tournament a little underdone having not being able to gain exemptions into the ‘big three’ Australian Tour’ events this summer.

“My preparation was a little different to a lot of the other guys in that I didn’t have much tournament play, but I’ve worked hard with ‘Team Felton’ this summer and to get a two year exemption with Sunday’s win gives me a base moving forward.”

Combining practicing and working in the Professional Shop at his home club Gosnells, near Perth in Western Australia, sees Felton working long hours both on and off the course.

It’s this drive and dedication helped him work his way through the elite amateur ranks, overcoming various stumbling blocks which confront players knocking on the door for selection with the authorities.

“I’ve learnt to be smarter with my time,” says Felton.

“I’m practicing harder and smarter than when I was an amateur. A lot more focus is now upon short game drills as that’s where you score.”

In the new year Felton will play the Asian Q-School and attempt to get playing rights on that tour. That’s the immediate focus for him, along with forging his way on to one of the main tours.

With the benefit of a two year exemption on the Australasian Tour already in his bag, Felton can enjoy having a schedule for the 2016 Australian season.

“It’s one less issue to worry about,” says Felton.

“In your rookie year it’s about getting established, playing as many tournaments that you can get into and learning from that. It was good to go out there last Sunday and play well and shoot on a final round four birdies and no bogeys.”

“It takes a lot of pressure off, a trip to Q-School was on the cards obviously so it’s taken that extra pressure off, I can plan out my year now so we will go from there.”