Those qualifying events for any of the world’s major golf tours are probably more of an endurance test than anything the successful players might actually face on tour.

Yet rookie Hunter Valley professional Dylan Perry has come through with flying colours after recently earning his card on the lucrative Japanese Tour for 2019. 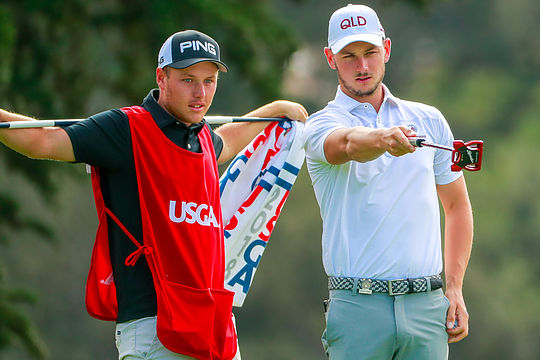 Dylan Perry lines up a putt at the 2018 US Amateur (Credit: USGA)

With the first event scheduled for mid-January, Perry can now focus on making his mark there after finishing 22nd on a countback with the top 25 players securing playing rights for next year.

Perry enjoyed a successful amateur career prior to making his professional debut at the recent NSW Open at Twin Creeks, finishing third, but has already proven he can knuckle down when the going gets tough.

He finished runner-up at the 2017 British Amateur after finishing top 16 in 2016. Perry won the 2017 Riversdale Cup along with the 2016 Victorian and Queensland Amateur titles. While he could only manage a final-round even-par 72 in the 108-hole marathon, Perry still showed he has what it takes to succeed next year.

“I’m not sure how many starts I will get, but it feels good to get a card,” said Perry.

The next best Aussie in the field was Sydney’s Andrew Evans, with the former Australian Masters runner-up carding a final-round 68 to jump into a tie for 31st and at least secure some status in Japan next year.

They will add to an Aussie contingent which already includes the likes of Brad Kennedy, Anthony Quayle and Brendan Jones.

Former Australian amateur champion Scott Arnold shot a slick 65 in the final round in Japan but could only finish 55th while other Aussies competing, albeit unsuccessfully, included Scott Strange (61st) and Neven Basic (91st).

Kiwi pros Harry Bateman and Ben Campbell finished in a tie for 42nd at 13 under, well back from the qualifying mark.

The first event of the Japan Golf Tour in 2019 is in Singapore in January although there may only be limited places available there due to the event being jointly-sanctioned with the Asian Tour.