It was Shibuno’s first appearance outside of Japan and she became the second player this decade to win in her first major appearance, joining Hyo Joo Kim’s victory at the 2014 Evian Championship.

It was a fairytale finish for the player known as “Smiling Cinderella”. She bowed to the crowd in the grandstand as she approached edge of the 18th green and rammed her birdie putt into the centre of the hole, before punching the air and flashing the smile for which she is known.

Her final round 68 to finish at 18-under, left her a shot clear of fast-finishing Lizette Salas, who lipped out from inside of two metres with her birdie attempt on 18 to take outright second following a 65.

World No.1 Jin Young Ko, who was looking for her third major title of 2019, was third, her 13-metre birdie putt on 18 coming up just short. 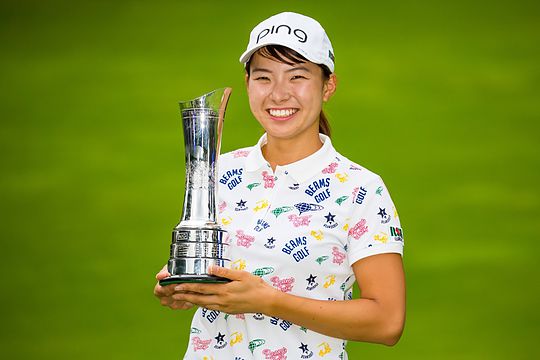 The AIG Women’s British Open is her third title this season. In May, she won the World Ladies Championship Salonpas Cup, a major on the JLPGA Tour, and added a second victory in July at the Shiseido Anessa Ladies Open. She started the week ranked 46th on the Rolex Women’s World Golf Rankings but was almost unheard of outside Japan.

“I was looking online and I did see that it’s been 42 years since a Japanese player has last won. I do feel that I have accomplished something great, but I really don’t know the reason why I was able to accomplish it.”

Minjee Lee topped the Aussie field in a share of 11th place while Women’s PGA champion, Hannah Green, closed with a 3-under 69 for a share of 16th.

Su Oh made up for three rounds of 72 with a final round 6-under 66 to move into equal 21st and cap off a great week for the Down Under crew.

Sarah Kemp was the only other Aussie to make the cut with rounds of 75 and 78 dropping her into equal 70th.