Asian Tour rookie Todd Sinnott has secured a convincing three-shot victory at the Leopalace21 Myanmar Open in only his second tournament in Asia.

The 25-year-old Sinnott fired a flawless six-under-par 65 for a winning total of 14-under-par 270 to defeat Spain’s Carlos Pigem, who closed with a 68 at the US$750,000 event sanctioned by the Asian Tour and Japan Golf Tour.

After hitting six balls into the water in the opening two rounds, Sinnott had to fight tooth-and-nail to make the halfway cut. He moved from 40th position to tied fourth after the third day and cruised to victory thanks to six birdies in the final round.

Sinnott was three-under after 12 holes but it was a pair of birdies on 13 and 14 that put him in contention. As his challengers slipped down the leaderboard, he had a comfortable three-shot cushion heading into the last hole where he sealed the deal with a birdie.

Sinnott is the first Asian Tour rookie to win since Danthai Boonma of Thailand won in Singapore in 2015. 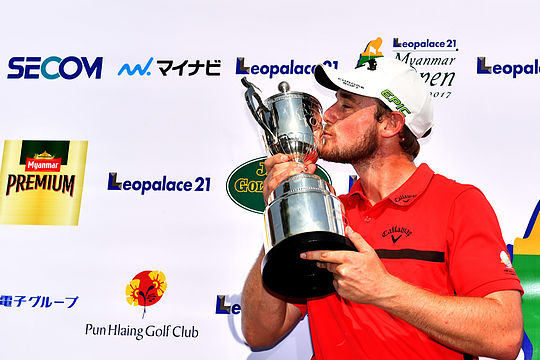 “It is a fantastic day to get my first win as a professional. I birdied two in a row on 13 and 14 and when I did that I knew that if I finish strongly I would have a good chance at winning. I knew where I was the whole day and knew what I had to do to get up with the leaders and keep pushing on. I was really focussed the whole day to try and shoot the lowest score that I could shoot.”

“I feel a little bit relieved to get that first win. Excited and pretty proud as well. I’m proud with the way I played today.”

Matt Griffin was the next best of the Australians following a final round 66, which moved him into 15th place alongside South Australia’s Adam Bland.