Justin Thomas overcame a double-bogey at the 14th hole and some nervous closing moments on Sunday to win the CIMB Classic for his first PGA Tour title and $1.26 million in prize money.

Thomas holed a 6-foot par putt on the 18th for a one-stroke victory over Aussie Adam Scott. 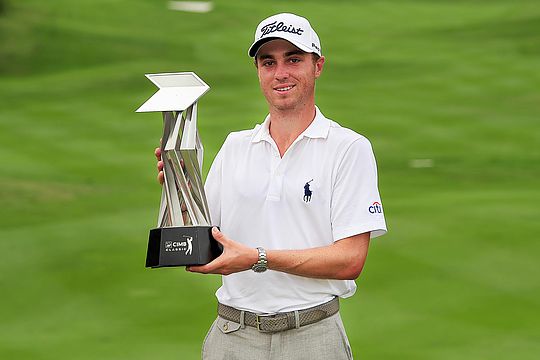 Thomas shot a 6-under 66 for a tournament-record 26-under at Kuala Lumpur Golf and Country Club while Scott, playing two groups ahead, had an eagle and seven birdies in his closing 63.

“I still can’t believe what happened,” said Thomas. “I made that par to clinch the title. I don’t care how I got it done; it just feels awesome.”

Thomas, a close friend of Jordan Spieth, continued the early-season trend of players in their early 20s claiming their first PGA Tour victories, after Emiliano Grillo at the Frys.com Open and Smylie Kaufman at the Shriners Hospitals for Children Open.

Americans Brendan Steele and Kevin Na tied for third at 24-under after respective rounds of 68 and 67. Japan’s Hideki Matsuyama finished in sole fifth place, two strokes further back.

Scott gave it everything he had, hitting seven birdies and an eagle in his bogey-free final round of nine-under and on the last had a chance for eagle which it turned out would have forced a play-off.

“Look, 35-footers breaking 4 feet are not gimmes. I threw everything I could at it today. I’m playing well, and that’s nice, because I haven’t played that well for a while,” said Scott.

Earlier, Scott had taken the lead on the 14th after Thomas’s double bogey on the same hole but the American rallied with three consecutive birdies to secure the victory.

Scott’s final day heroics are a step in the right direction and the world No. 12 took plenty away from the weekend.

“These are important events to start the next year’s PGA Tour season,” said Scott, 35.

“This week is the World Golf Championship. I would love to get into contention there and try and win. I would like to have a win before the end of the season. So this is a step in the right direction.”

“I want to get up there and play and show them that the old dog’s still got something.”

It was Scott’s best result so far this year and will hopefully bring strong form with him to Melbourne for the Masters and to Sydney for the Open later this month, two of the summer’s “Triple Crown” events for which he will be a main drawcard.