Finland’s Sami Valimaki won the Oman Open in a dramatic play-off on Sunday to secure his maiden European Tour event in just his sixth start. The 21-year-old pipped South Africa’s Brandon Stone at the third extra hole to claim the championship.

Valimaki and Stone finished regulation play level on 13 under par at Al Mouj Golf after both shot two-under-par 70s in the final round in difficult conditions. 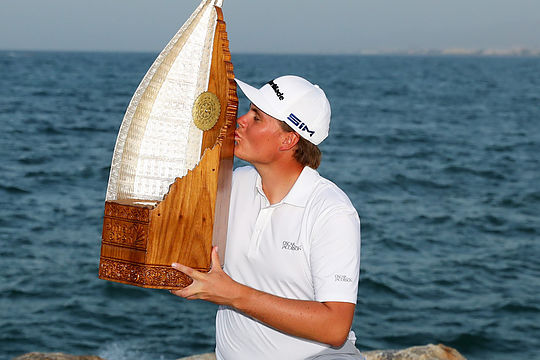 The pair halved the first two playoff holes on the par-four 18th when Stone then opened the door for Valmaki with a bogey on their third time around, meaning par was enough for Valimaki to win the playoff.

Earlier, Valimaki took the lead in the final round with back-to-back birdies from the seventh hole but then found a bunker on the ninth on his way to a double bogey. He bounced back with four birdies on the back nine, including a clutch putt from 12 meters to force the extra holes with Stone.

“It’s awesome,” he said. “There are not many words to say. It’s unbelievable. After the ninth hole, when I made a double, I knew that the tenth hole is good and I had to make birdie on that.”

“I didn’t make a really good par on 11 and after that bogey I felt like, ‘okay this is gone’. But then I just grinded, made three birdies and on the last, an awesome birdie.”

A previous winner on the feeder tours, including four wins on the satellite Pro Golf Tour after turning professional in January last year, Valimaki was playing just his sixth European Tour event following his step up from Qualifying School.

But while the field he had to beat in Oman was average compared to what the European Tour has to offer with not one of the 17 men who finished in the top 10 ranked inside the world’s top 100 and with only three were inside the top 150, the victory still provides the exemption perks and the winner’s share coming in at €265,121.34.

The Oman Open field was headed by Eddie Pepperell, Edoardo Molinari, Martin Kaymer and Thomas Pieters, yet none managed to fire during the week.

The final round began with a crowded leaderboard as six players tied for the overnight lead with Joost Luiten among them looking to win his second title at the Al Mouj Golf club. The Dutchman fell out of contention after shooting a 3-over 75 to finish joint tenth with an 8-under.

Frenchman Adrien Saddier (69) finished a shot back of the leaders on 12-under 276 in third with Italy’s Guido Migliozzi (71) and Finland’s Mikko Korhonen (72) rounding out the top five another shot back.