Matthew Wolff needed only his fourth start on the PGA Tour to secure a maiden professional win after draining an eight metre eagle putt on the last hole on Sunday for a dramatic 3M Open victory.

Wolff, 20, became the second-youngest US PGA winner in 80 years by firing a six-under par 65 in the final round to edge out Bryson DeChambeau and Collin Morikawa by a stroke. Only four players in PGA Tour history have won with fewer starts than Wolff, who attended Oklahoma State.

Wolff, who was also the 2019 NCAA champ, is the last 20-year-old to win since Jordan Spieth claimed the John Deere Classic in 2013. Wolff finished 72 holes on 21-under at TPC Twin Cities in Blaine, Minnesota and joins Tiger Woods and Ben Crenshaw as one of only three players to win the NCAA individual title and a PGA Tour title in the same year.

“It was the most excited I’ve ever been,” said Wolff. “I’m usually not an emotional guy at all, but tears definitely came to my eyes when I stepped off and picked that ball up out of the hole on 18.”

“I’m speechless. That putt, and to do that with all the nerves, and trying to get my Tour card. I had the same celebration when I won the national championship at Oklahoma State. I kind of stepped and yelled, ‘Come on!’” 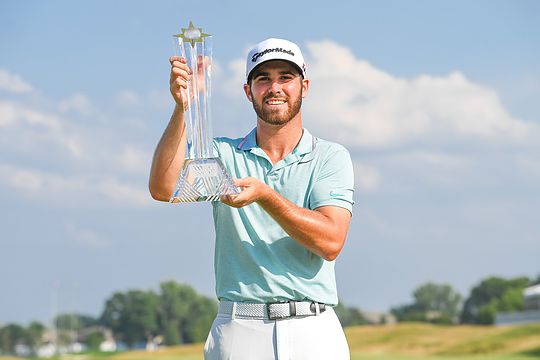 DeChambeau, who was playing one group ahead of Morikawa and Wolff, made eagle on the par-5 18th hole and took a 1-shot lead before seeing victory snatched from within his hands following Wolff’s monster putt on the last.

“I had no idea he would make that putt,” said DeChambeau. “It’s so competitive now. Anyone can win on any week. It’s absolutely impressive.”

Both Wolff and DeChambeau toured Australia as amateurs playing in our highest world ranked amateur tournament, the Master of the Amateurs.

Wolff and DeChambeau (a former US Amateur Champion) had the makings of players to be reckoned with someday on the professional circuit. They easily stood a cut above the best of our amateurs and are now rightly contesting each week on golf’s biggest stage. Both had that “X” factor that moves your needle.

This 3M Open had plenty of excitement as the ‘young guns’ did battle in the closing stages on Sunday when at one point there were 14 players within two strokes.

When Morikawa went off on his run, Wolff applied the gas and responded by playing his last five holes in 4-under par to claim a dramatic victory in his just third start as a professional.

He finished T-80 in his debut at the Travelers Championship and then missed the cut at last week’s Rocket Mortgage Classic.

Rod Pampling finally made a cut on the PGA Tour to be the best of the Australians finishing in a share of 56th position. Curtis Luck also made the weekend but a final round 71 saw him fall 11 spots to finish in a share of 58th position. Jason Day finished at 5-under to share 66th position.

Cameron Davis missed the cut along with Matt Jones.