Germany’s Paul Yannik secured his maiden European Tour title on Sunday with a one stroke victory at the Mallorca Open over England’s Paul Waring and fellow countryman Nicolai Von Dellingshausen at the Son Muntaner Golf Club in Spain.

The German carded three birdies and four bogeys for a 1-over 72, finishing the tournament on 15-under-par to win in his 26th appearance on the European tour.

“I’m speechless, honestly, I’m just so happy,” said Paul. “It was really hard today. My ball striking was unbelievable all week. I hit it really close at the first couple of holes and couldn’t make any putts. So that was really hard to just stay in the moment. But luckily none of the other guys really made a lot of putts.”

Paul attended the University of Colorado from 2013 to 2018. He was also a member European Amateur Team Championship in 2014, 2015 and 2016. The 28-year-old turned professional in May 2018 and finished runner-up at the Rolex Challenge Tour Grand Final in 2021, securing his playing rights on the 2022 European Tour, ultimately finishing ninth on the Challenge Tour Rankings. 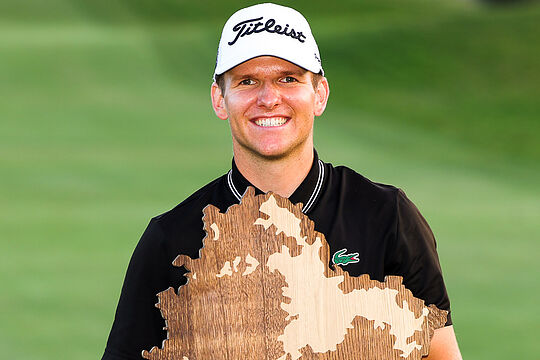 New Zealand’s Ryan Fox has moved up to second on the Rankings, overtaking Matt Fitzpatrick who was playing in the PGA Tour’s CJ Cup event, after he finished in a share of fourth on 13-under-par alongside Dale Whitnell.

World number 26 Fox, who was bidding for his third win of the season, finished with a disappointing 74, including an opening hole double-bogey, after having a share of the lead after the third round.

Scott Hend finished the best of the Australians in a share of 11th position at 10-under-par, with Maverick Antcliff in a share of 70th.