Tom Hoge and Sahith Theegala have taken out the 2022 QBE Shootout with Theegala making a clutch birdie putt on the 18th hole to take a one-shot win over Charley Hoffman and Ryan Palmer at 34 under.

Hoge and Theegala closed with a final round 10-under 62 in four-ball to claim the title.

“It’s nice to get a taste of victory because it’s so hard out here,” said Theegala.

The QBE Shootout had a solid field, where 24 players, including two players from the LPGA Tour, formed 12 teams and competed over three days. 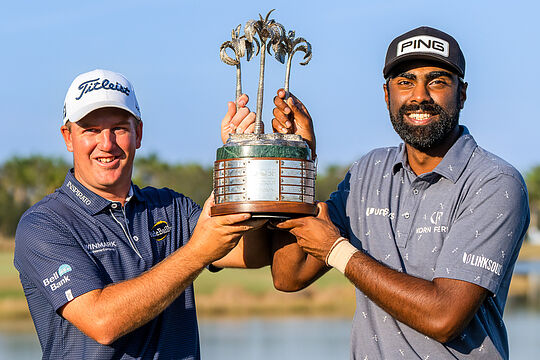 The QBE Shootout is unofficial money event on the PGA Tour hosted annually at Tiburon Golf Club in Naples, Florida, in a team golf format event. It was originally played during the off-season, but now it is played during the wrap-around season’s December break.

It was formerly called the Shark Shootout, and Greg Norman was a big reason behind the success of the tournament. Norman, the current CEO and Commissioner of LIV, did not participate this year at the QBE, neither did any of the LIV players who previously have played.

Harris English and Matt Kuchar, trying to win the QBE Shootout for the fourth time, finished two shots behind after a 62. Max Homa and Kevin Kisner had a 63 and finished fourth.

Despite opening with back-to-back rounds of 61, a final round 70 saw Jason Day and partner Billy Horschel finish the event well down the leaderboard in a share of 10th place.