Rookies lead US in Presidents Cup

USA is a team packed with six rookies for this Presidents Cup but you wouldn’t know it.

The defending champions lead 13-9 after the Internationals began Saturday trailing 7-5. 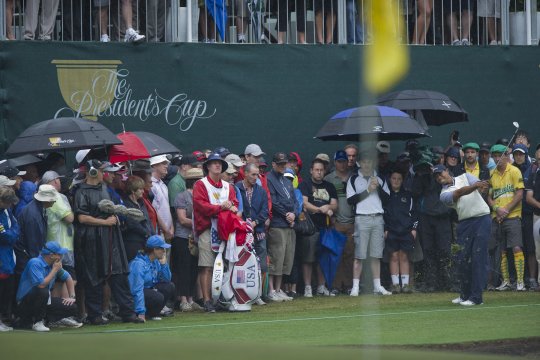 Tiger Woods chips back onto the 11th at Royal Melbourne during the 3rd day of the Presidents Cup. (Photo: Anthony Powter)

Webb Simpson is one of six rookies on the American squad and has proven his worth this week in Melbourne.

USA Captain, Fred Couples, has sent Simpson and Bubba Watson out as a team in the first match three consecutive days, winning all three, as the United States continued to build an imposing lead in this Presidents Cup

Bill Haas and Nick Watney are also representing the United States for the first time in international competition, while Kuchar, Dustin Johnson and Bubba Watson got a taste of team competition last year at the Ryder Cup.

The USA rookies have proved too strong in the three days of competition, setting the stage for another likely USA victory following Sunday’s twelve singles matches.

The International team also has produced standout performances for its rookies this week.

Korean rookie, KT Kim, has emerged as the unlikeliest hero of the Presidents Cup for the Internationals.

Kim, 25, holed a series of clutch putts today to stave off the biggest name in world golf, Tiger Woods and earn his International team a valuable point in the four-ball round.

The best overall round of the competition for the Internationals was set up by the South African pair Retief Goosen and Charl Schwartzel who took out the previously unbeaten Bubba Watson and Webb Simpson 2&1 in their afternoon match.

The third International four-ball win in the afternoon came thanks to the veteran Korean KJ Choi and Australia’s Geoff Ogilvy.

Ogilvy and Choi dragged themselves to the front at the 11th and then halved the final seven holes to cling to their one-hole victory.

Both Ogilvy and Choi lost their respective morning foursomes matches after which the United States led 11-6 before the afternoon.

The United States of America, winners of six of the previous eight editions – with one tied – need only to win 4.5 of the remaining 12 points to retain the Presidents Cup.

Today’s result was evident when the Americans blew the International team away with a 4-1 morning foursomes demolition.

The International team has a mountain to climb to win this Presidents Cup and no team has ever come this far behind to claim victory.

With the Internationals trailing 13-9 heading into the final day and twelve points on the table, they will need to dig deep.

The problem for the Internationals is that the American rookies such at Watney and Simpson continue to play golf well beyond their years and on a course they’ve never experienced playing on before.

Hass, Watney & Simpson are getting results for the Americans and are not playing like rookies, but more like seasoned veterans.

“We’ve got a bunch of kids on this team who don’t need a whole lot of mentoring,” says Phil Mickelson.

“Our captain, Fred Couples, has seen that and let them go.”