Rose back to No.1 with Turkish Airlines Open win

Justin Rose is determined to make his reign as the new World No. 1 a long one after capturing a play-off victory in the Turkish Airlines Open in Belek.

Rose defeated China’s No. 1 player, Haotong Li, at the first extra play-off hole when the 23-year Shanghai-born golfer three-putted for bogey to hand the Englishman his 19th pro career victory.

The win, 20-years after turning professional, is also the first time in Rose’s career he has successfully defended a title.

“I’ve had some pressure-packed Sundays of late and dare I say, kind of coming way with consolation prizes in a way,” said Rose.

“I went first to World No. 1 after losing in a playoff, finishing fourth at the Tour Championship but winning the FedExCup.”

“The FedExCup was an interesting one because I knew exactly what I had to do and I was playing a tournament within a tournament.” 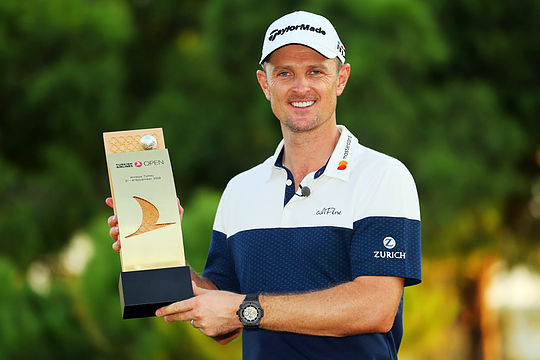 “But to not having that winning feeling in a tournament but still coming away with accolades. I was keenly aware I wanted to get back in the winner’s circle and it was good to get it done today.”

“It would be lovely to end the year at No. 1 and it will be nice to have Christmas turkey at No. 1, of course. I’m not going to stress about it to be honest with you.”

Li went into the final round leading by three shots and after a round of a level par 71 ended regulation play tied with Rose on 17-under par.

Rose had bogeyed his closing two holes, including missing his par putt at the final hole for victory lipping-out in a round of 68.

Li had capped his round with a tap-in eagle putt at the par-5 15th but he also three-putted the last for a bogey.

The win lifts Rose to third on the Tour’s Race to Dubai and while the Englishman mathematically could still win the No. 1 crown he has disappointed the European Tour with a decision not to contest the remaining two events.

Instead Rose will again tee-up in the Tiger Woods hosted Hero World Challenge commencing on 26th November in the Bahamas while he also intends to defend his Indonesian Masters title on the Asian Tour starting on 13th December.

“As of now, I am playing the Hero at home, try to roll out of bed for that one, and Indonesia,” he said.

“I have also a few other things I need to take care of.”

Li was looking to create Tour history in becoming the first Chinese golfer to win twice in a single European Tour season and while finishing runner-up, he looks assured of being just outside the top-40 on the World Rankings.

It should also ensure Li earns a second straight invitation at the end of the year to contest the 2019 Masters at Augusta National.

“It was tough day for me honestly and I holed a couple chances, but not until the end, the first playoff, I saw that ball definitely go in, but a little bit too much,” he said.

“I was a pretty good last round, especially against Rosey, and he is such a nice guy. Hopefully next time I can play better.”

Western Australia’s Jason Scrivener lead the Australian charge in a tie for 23rd at 9-under while Lucas Herbert continued to impress with another solid showing at 6-under and a share of 35th place.

Wade Ormsby was T47 with Scott Hend another shot back in equal 68th.

The European Tour now moves hemispheres to South Africa for the $7,500,000 Nedbank Challenge in Sun City.