England’s Justin Rose has added his name to a honour roll of some great champions in banking the UBS Hong Kong Open in suburban Fanling.

The highest World Ranked player in the field had to dig deep winning by a shot over Dane Lucas Bjerregaard.

Rose bogeyed the last in a two under par 68 for a 17-under par winning tally to claim a seventh European Tour title and his fist since capturing last year’s Scottish Open.

“Lucas played incredible golf,” said Rose. “It was the first time I had the chance to play with him. I was thoroughly impressed, not just his game but his temperament and how he is as a person.”

“When you separate yourself from the field like we did, it’s probably a tough one for him to lose. But he didn’t lose it, just both of us played incredibly well and separated from the field.”

“I’m very happy to get the job done. I had a chance to win in Napa last week, I was tied for the lead going down the tenth hole and let that one flitter away a little bit. I wanted to hang onto this one.” 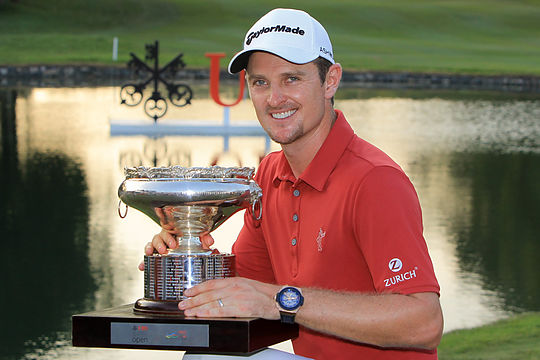 Rose’s eighth European Tour win takes him above Shane Lowry into fourth in the Race to Dubai and the 2007 Order of Merit winner would love to finish top of the pile again at the DP World Tour Championship.

“Dubai, especially, is a tournament I’ve played well at in the past,” he said. “I’ve had a couple second-place finishes there. I’d love to break that duck, as well.”

“And if you win in Dubai, you’ve got a great opportunity to wrap things up, so I’m looking forward to the next few weeks.”

There was more drama further down the leaderboard with players battling to make it into the top 110 in the Race to Dubai and maintain their playing privileges for next season.

Matt Ford, who began the week at 117th, secured his card with a tie for seventh but Ben Evans, who was one place behind Ford at 118th and finished one shot behind him, fell agonisingly short at 111th.

The leading duo came into the day at 15 under and Rose made the first move as he drained a 20-footer on the second to move ahead on his own.

Bjerregaard flew his second shot over the green on the third but recovered to pitch to within six feet and join Rose at the top with the World Number Seven showing him the line after reaching the green in three.

Another birdie from Bjerregaard on the fourth moved him out in front on his own but the Dane saw a three-foot putt lip out on the eighth to slip back to 16 under.

A stunning approach to the ninth then set up a birdie with Rose three-putting to drop a stroke and hand his rival a two shot lead.

Rose birdied the tenth to get back within one shot and when Bjerregaard found the trees off the 11th and made a bogey, the Englishman secured his par to get back on level terms.

But a 30-footer on the 12th put Bjerregaard back in the driving seat as the pair went blow for blow for the second consecutive day.

The duo were both ragged off the tee at the 13th and had to pitch out of the rough but got up and down brilliantly for a pair of birdies to maintain the one shot gap.

A second two-shot swing of the day was then to come on the 14th when Bjerregaard found the rough with his tee shot and then caught a branch with his second. Rose saw a birdie putt agonisingly lip out but his rival’s bogey effort did the same and the lead changed hands again.

Both men made par on the 15th but Rose flew his approach on the next straight over the flag and rolled in from 15 feet to open up a two shot lead and give him the cushion to bogey the last.

“It was fun to battle with Justin these last two days,” said Bjerregaard. “It’s guys like him that I want to go out and compete against, and at least I gave him a little bit of a scare.”

“Early on today, that double-bogey on 14 really cost me. Got a lucky break there on 13 and made birdie, which was nice.”

“That double-bogey on 14 really ruined it for me but all in all, happy the way I’ve played. Happy how I played this weekend, especially,” said Bjerregaard

South Korea’s Soomin Lee produced the round of the day as he went round in 64 to surge up to a share of third with eight birdies and two bogeys.

Matthew Fitzpatrick had looked set to finish third all on his own at 13 under but three bogeys in his final four holes saw him drop back to 11 under as he sealed a fifth top three finish of the season to go with his British Masters title.

American Patrick Reed fired a 67 to get to 11-under and Australian Jason Scrivener was also in that group as he fell short of securing his card for next term.

Ford was then a further shot back after a closing 69 alongside Anirban Lahiri, Lin Wen-tang and YE Yang.

Ian Poulter, who was a late entry as he tried to make certain of playing the 13 events to maintain his European Tour membership for 2016, finished at five under after a closing 69.