Rose carves up final holes to take US Open lead

Justin Rose has birdied the final three holes at Pebble Beach to take the outright lead from a quartet which includes Rickie Fowler, Xander Schauffele, Aaron Wise and Louis Oosthuizen with a record-equalling round of 6-under-65.

Ironically Rose’s playing partner today, Tiger Woods, set that record low score when he won by a margin of 15 strokes at the 2000 US Open.

“It was obviously a fun day of golf,” said Rose. “I guess the round was going nicely. I was three under par, had a rough patch, had to scramble, work hard and keep my round together.”

“Even when I made a mistake, I was willing to accept it. I was trying to stay patient with myself mentally…and then got rewarded with a hot finish, birdieing the last three took a good round to a great round.”

The Englishman came to the par 4 16th hole at 3-under after grinding through a stretch of seven pars but from there he flipped his round into top gear with three superb birdies on the way home. 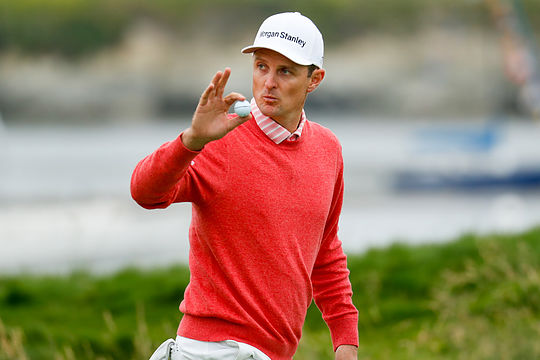 Justin Rose waves to the crowd after his birdie at the 17th hole (Credit: USGA)

Tiger Woods struggled for most of his round today with three birdies from the 4th hole let down by an out of character double-bogey at the par 3 5th hole. The former No.1 couldn’t buy a birdie from there and came home with 11 straight pars only made possible by some great putting along the way to save the day.

Rory McIlroy went out early in the morning and looked solid in backing up from his win at the Canadian Open last week. The 30-year-old closed at 3-under and sits in an eight-way share of 8th place alongside a group including Henrik Stenson and Francesco Molinari.

Marc Leishman was the best of the Australians at two-under and equal 16th with Jason Day and Adam Scott another shot back at 1-under.

Back-to-back US Open winner Brooks Koepka leads a group of 12 players on 2-under 69. The Florida-native came out with a roar and was sitting at 4-under after 6 holes but fell away from there to limp home into 16th place.