England’s Justin Rose clinched his first major title with an emotional two-shot victory at the 113th US Open on Sunday after overhauling 54-hole leader Phil Mickelson in the final round.

Rose closed with a level-par 70 in difficult scoring conditions at Merion Golf Club, posting a 1-over total to snatch victory from Mickelson and Australia’s Jason Day. 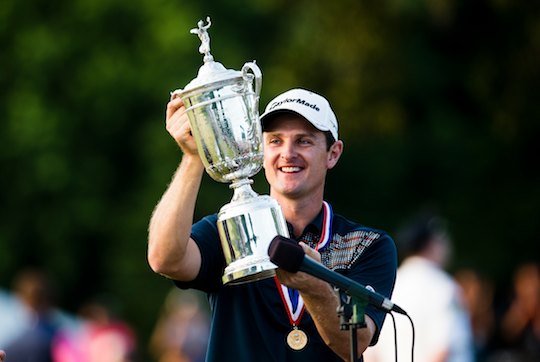 Mickelson, a now six-time runner-up in these championships, bogeyed three of the last six holes for a 74 to tie for second at 3-over-par along with Day, who closed with a 1 over-par round.

Americans Hunter Mahan, Jason Dufner, Billy Horschel, and two-time US Open champion Ernie Els of South Africa, were a further two strokes back in a tie for fourth.

Day, the 2011 US Open and Masters runner-up, started three shots off the lead and opened with three straight pars before making birdie on the par-5 fourth to be just two off the pace.

By the eleventh hole, Day had a share of the lead with Mickelson however a pushed tee shot found Merion’s deep rough and the resulting bogey halted the Aussie’s momentum.

Day was unable to go low on the birdieable 12 and 13th holes, which Rose was able to capitalise on.

“I think I’ve just got to keep putting myself in position to win,” said Day.

“I’ve been close so many times now in Majors, especially at a young age, which is nice. I’m still 25. I turn 26 at the end of the year. I’ve got plenty of Majors to play in and hopefully I can keep doing the same as I’m doing, and hopefully win one soon.”

It was 17 years since the last English-made triumph at a major golf tournament when Nick Faldo infamously claimed the Masters over Greg Norman in 1996. Tony Jacklin was the last English winner of the US Open in 1970.

“It feels fantastic,” said an elated Rose at the champion’s press conference.

“Going forward it gives me a lot of confidence. I don’t know if it takes pressure off, but it’s a moment where you can look back and think childhood dreams have come true.”

Australian John Senden, who briefly held the outright lead early in round three, finished with 74 to be eight shots off the pace in a tie for 15th.

Masters champion Adam Scott let his chances of a grand slam slip, closing with a 75 to be 15-over in a tie for 45th position and Alistair Presnell rounded out the Aussies at 23-over.

Tiger Woods finished at 13-over in a tie for 32nd position and twelve shots behind Rose.

After the second round Woods was just four shots off the leaders and very much in contention to end his five-year drought at the majors. But weekend rounds of 76-74 resulted in his worst weekend in a major championship.