Rose’s reward for winning the Turkish Airlines World Golf final against an eight-man field was a massive $1.5 million. 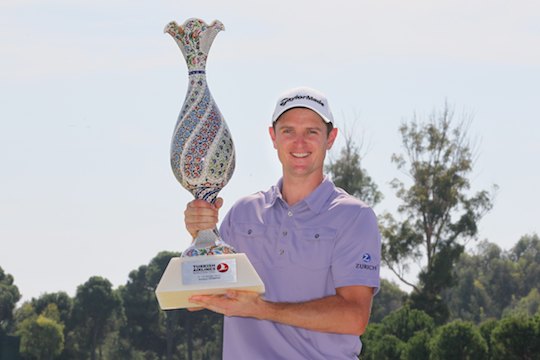 “It’s mind-blowing to think about it, so I try not to. It’s not your average week’s work,” said Rose.

Aside from the monetary rewards, Rose was quick to highlight how well he is playing as the European Tour heads to Dubai.

“There are no skeletons in my closet on the course right now,” says the world number five, who this week won five matches out of five, seeing off Westwood (twice), Tiger Woods, Hunter Mahan and US Open champion Webb Simpson.

“There are no shots I am worried or concerned about, and that’s a fantastic feeling to have.”

“One day my driving might be a bit off, or my putting, but I always feel like I have something every day that I can fall back upon.”

That was certainly the case in Turkey, where Rose played five rounds in a total of 21-under par. That was a stroke worse than the unlucky Westwood, who even went round in a bogey-free 67 in the final and still found himself trumped by Rose’s mistake-free 66.

On Thursday, Rose took down Tiger Woods – also by one stroke – in the semi-finals to set up his final’s appearance.

Woods had advanced with a six-shot win over Rory McIlroy in the event’s marquee matchup.

It was a final of high quality between the two Englishmen, in which neither player dropped a stroke in shooting a combined total of nine under, but it ultimately came down to Rose’s superiority on the greens.

There is no need to feel too sorry for Westwood, though. He departed with the consolation of $1 million for finishing second.

“The defeat is not that difficult to swallow,” said Westwood.

“I would be daft to criticise myself for the way I played all week. There is no negative. It has been a great week and a good way to refocus for the rest of the year.”

The world number four carded the low round of the week, a 10-under par 61, against Charl Schwartzel in the semis after ousting reigning US Open champion Webb Simpson earlier on Thursday.

Westwood was 22-under for the week, Rose 21-under and Westwood’s efforts sees his earnings in his last two tournaments move above the million dollar mark.

Rose will tee it up again in twelve days at the BMW Masters in Shanghai and then head to the HSBC Champions in Shenzhen. He is £380,000 behind Rory McIlroy in the Race To Dubai and is in sight of his second Order Of Merit.

With McIlroy appearing to be losing steam in the tail end of the season, the ‘race’ is shaping up nicely.

Despite being more than £1million behind McIlroy, Westwood is not ruling out his own chances either.

“If I can maintain this form in China and in Dubai then I might have a sniff,” he said.

“And clearly the way Justin’s playing he’ll have a big shout.”