Rose moves to World No. 3 with Fort Worth victory

England’s Justin Rose claimed his ninth PGA Tour title with a three-shot win at the Fort Worth Invitational on Sunday.

The new world number 3 carded a 6-under-par closing round of 64 to progress with a 20-under total, three clear of nearest challenger American Brooks Koepka.

Rose, who began the day with a four-stroke lead, hit six front-nine birdies en route to a six-under-par 64 at Colonial Country Club that left him one shot off the tournament record score of 21-under 259 set by Zach Johnson in 2010. Rose’s 20-under total also tied his career-low 72-hole score.

“Really, really proud of this one,” said Rose. “This is a special victory for me. I think obviously just winning here at this venue I think is really what means so much. A tournament that I pick up the trophy and the first thing I saw was Ben Hogan’s name twice. It sort of says a lot.” 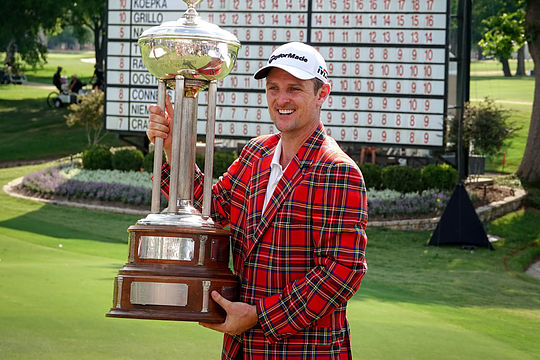 The victory is the 37-year-old Olympic champion’s fourth global success since November 2017 and sees him move to third in the world rankings behind Justin Thomas and Dustin Johnson and comes just a couple weeks before the only major he has ever won, the US Open.

Shinnecock Hills in New York is a classy Rose-type venue which will suit the Englishman’s game. Having now matched his career high of third in the world, the 2013 US Open winner has the number one spot and more major glory in his sights.

“To put myself in with a chance there would be huge,” said Rose. “We have major season coming up now as well, and they’re coming up thick and fast. To be hitting a bit of form hopefully at the right time would be amazing.”

Argentina’s Emiliano Grillo carded a closing 64 to finish third on 16-under, two ahead of America’s Kevin Na, who tied the course record with a 61 which included nine birdies.

Adam Scott was the best of the Australians finishing in a share of 52nd position, his closing round off 64 elevating the former Masters champions 25 positions up the leaderboard. John Senden was the last of the Aussies to make the weekend and finished at 77th position.