England’s Justin Rose outshone pre-tournament favourite Tiger Woods with a blistering display with the putter on the opening day of the Arnold Palmer Invitational at Bay Hill in suburban Orlando.

Rose, who lives just 30 minutes from the course, needed just 21 putts in a round that included a second hole bogey but also an eagle and six birdies including four in succession from his 13th in a seven under par 65. 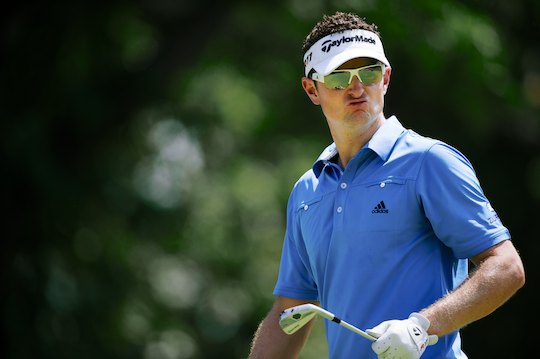 Justin Rose fired a first round of 7-under 65 (Credit: Anthony Powter)

It is easily Roses’ lowest score by two shots in 31 rounds of the $6.2m event and with Woods, who is looking to win the event for a PGA Tour record matching eight times, capping his round with a seventh hole eagle but then bogeying his next two in an eventual 68.

“I’m a little surprised by that number but anytime you go low at Bay Hill it’s a bonus but starting out this morning the first five, six to eight holes felt a grind as it was cold and it was windy,” said Rose.

“So it was a golf course where you had to go out and play well and you couldn’t fake it out there.

“But not all parts of my game were perfect but I have to say the putter was really, really hot and they’re fun days when that happens, and it was one of the hottest days I’ve had for some time with the putter.”

Rose is looking to win for a first time in some 54 weeks since capturing the WGC – Cadillac Championship in Miami.

Woods, who won the same event two weeks ago, will got back to World No. 1 should he succeed also in Orlando.

However Rose was quick to remind the 14-time Major winner he’s just as determined to deny the Star Spangled American.

“It was nice to play well in front of Tiger because we all know what sort of record Tiger has here at Bay Hill,” said Rose.

Woods had raced to the lead when he eagled the par five 16th or his 7th hole but then gave the shots back with bogeys on the next two holes.

“I scored well but certainly didn’t play my best, but I got around and made a few good saves out there,” he said.

“I haven’t seen these pins out there today, and they were pretty dicey. They’re really tough to get after, especially with the way the wind is blowing the way it is.

“So I drove it well, didn’t hit my irons well and didn’t control my distances well or my trajectory. Other than that, was good.”

Woods is not only looking to return to World No. 1 this week with victory but also match a PGA Tour record of eight wins set by the late Sam Snead who captured eight Greater Greensboro Open titles.

And while Woods was not fully on song with his game he was quick to praise Rose.

“Justin played a beautiful round of golf today,” said Woods.

“He had every single facet of his game working, so we had a good time out there.”