Rose takes four-shot lead on day one of Masters

It looked like 3-under 69 was going to be the round of day for several players with half of the field still on the course.

That was until Justin Rose caught fire with an eagle at the par-5 8th hole before cruising home with another seven birdies to finish the day at 7-under 65 and a four stroke lead over Brian Harman and Hideki Matsuyama. 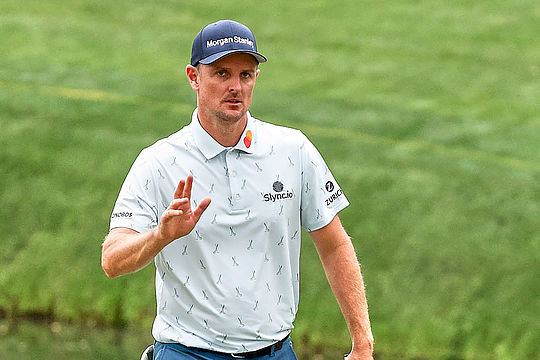 Rose could never have imagined what was to come after bogeying his opening hole and dropping another shot at the 7th hole.

“I kind of knew 2-over through 7 is not the end of the world, but also knew you’re going in the wrong direction. You can’t win the golf tournament today. Even with a 65 you can’t win it today. You can only probably lose it today, obviously,” said Rose, whose sole major win came at the 2013 US Open.

“So obviously the eagle [at the 8th hole], boom, straight back in there, and I guess almost just piggybacking with a birdie straightaway at No. 9, suddenly I turned in 1-under, and I could feel like I could actually leave the front nine behind as a job well done and kind of move to the back nine and try and build a score.”

This is the sixth time that Rose has led or co-led at the Masters, which is the most by any player, who has not gone on to win a green jacket. The Englishman has finished inside the top-10 on five occasions and was runner-up in 2015 and 2017.

Will Zalatoris, Christiaan Bezuidenhout, Webb Simpson and 2018 Masters champion, Patrick Reed sit in a tie for 4th on 2-under with Si Woo Kim, Jason Kokrak, current Open champion Shane Lowry, Tyrrell Hatton and Jordan Spieth another shot back in a share of 8th place.

Spieth is fresh off his first victory in four years at last week’s Texas Open although today’s round showed he still has some work to do with three birdies, an eagle matched by a triple-bogey and bogey in what was a rollercoaster round.

Speaking of rollercoaster rounds, Victorian Marc Leishman leads the way for the Australians at even par despite a scoreboard that went from good to bad in the space of nine holes.

Leishman kickstarted his day with a birdie before posting another three of the same before the 7th hole and briefly took the outright lead on 4-under until trouble came knocking at the par-4 9th hole with his first dropped shot.

Unfortunately that was the first of four bogeys on the way home and the 37-year-old fell into a 7-way tie for 13th alongside the likes of World No.2 Jon Rahm and Xander Schauffele.

“It was tough. I got off to a really good start, made some really good putts, and then kinda hung on coming in,” said Leishman.

“To get off to the start that I did, I would love to have shot 4-under on the back nine…but to get off to that start — it wasn’t the finish I was after, but also I didn’t throw it away, either. To shoot even par on a day like today, I was pretty happy.”

Matt Jones, Adam Scott and Cameron Smith sit in a share of 31st place at 2-over.

“Terrible. It’s just frustrating. I did absolutely nothing right today. So I’ve got to go back to the range, work on some stuff, go to the putting green and work on that as well. I’ll tell you it’s been extremely frustrating over the last year and a half, two years. Sometimes I get discouraged out there, but it is what it is,” said Day of his 5-over 77.

Play will continue tomorrow from 8am local time with the first of the Aussies, Marc Leishman, teeing off at 9am (Sat 1am AEST).