Justin Rose remarkably overcame an eight-shot deficit to capture a second WGC title with his two-shot success at the WGC – HSBC Champions in Shanghai.

Only seven of 77 players managed to break par on the Sheshan course including last year’s Olympic Gold medal winner in posting closing 68 in extremely windy conditions to win by two with a 14-under par tally.

World No. 1 Dustin Johnson enjoyed a commanding six shot lead before teeing off on Sunday with the red-hot American looking to become the first player to capture three World Golf Championships titles in a season.

However, instead of becoming the first player to win three WGC in one year, he tied a PGA Tour record for losing the largest lead in the final round. Johnson’s collapse matched the record for losing a six-shot lead, most recently by Sergio Garcia at Quail Hollow in 2005.

Johnson failed to manage a single bogey in stumbling his way to a five-over par 77 and eventually finished tied second with Brookes Koepka (71) and Henrik Stenson (70). 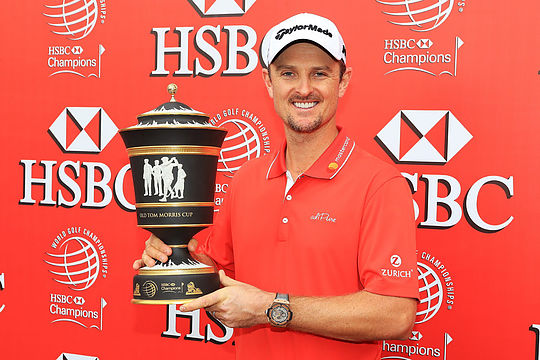 With Rose in the clubhouse, Johnson’s last hope of salvaging the title rested with an eagle at the last but with DJ’s ball rolling off the green and into the water the nightmare continued until the very end.

“It was the kind of day you certainly don’t expect,” said Rose.

“It’s also the kind of day you hope and dream for but a lot of things needed to go my way in order for a day like today to happen.”

“So, coming from eight shots behind, especially against a player like DJ, is something else.”

The win is Rose’s first since his Rio Games triumph but his first regular Tour title since late 2015 when he captured the Hong Kong Open.

Johnson’s shock collapse immediately ignited memories of his horror 2010 US Open final round of 82 that opened the door for Graeme McDowell to claim success at Pebble Beach.

“I just could never get anything going and didn’t hole any putts,” Johnson said. “It was pretty simple.”

“Even making the turn, obviously, I’m two-over (and leading by three), which is fine. I know I’ve got to just play solid on the back nine. I didn’t make any putts.”

“I felt like I rolled it good. Just nothing was going in the hole. Hit a couple really bad iron shots. That was probably the key there on 14. I just chunked it.”

“Same thing on 15. I just chunked it. That cost me two shots there. And then bogeying 16, that’s just bad. So I just gave a few away. But tough conditions. But I mean, it is what it is.”

Only two other players in PGA Tour history have come from more than eight shots behind on the final day to win — Scot Paul Lawrie (10 shots) in the 1999 Open Championship and Stewart Cink (nine shots) at Hilton Head in 2004.

Rose’s second WGC title lifts him from 13th in the world to sixth, with Koepka and Stenson now seventh and eighth respectively, pushing the absent Rory McIlroy down to ninth.

The Aussie attack failed to materialise with Jason Day making his week look better than it was with a final round of 4-under 68 to move into a tie for 11th place at 5-under.

Marc Leishman was next best in a tie for 38th followed by Adam Scott (T50).

Scott Hend was well-placed heading into the weekend but rounds of 78 and 77 put an end to his hopes as he slipped to equal 62nd place – two strokes ahead of Matt Griffin at 8-over.