(Torrey Pines, California:) Justin Rose has surpassed Nick Faldo as the winningest Englishman in the PGA Tour modern era with a two-shot victory in the Farmers Insurance Open near San Diego.

The World No. 1 ranked Rose birdied two of his closing four holes in a score of 69 to capture his 10th Tour title by two shots with a 21-under par total on the Torrey Pines course.

And Rose captured also a 24th worldwide success remarkably with a new set of Honma clubs that the 38-year old virtually still has the ‘L’ plates on his bag.

“I am really happy I readily challenged the status quo and sort of changed everything up in trying to get better and that is thanks to the guys at Honma as I have felt really comfortable with the clubs immediately,” said Rose.

“It’s a whole new-look me and I don’t mind that if it’s going to produce this winning golf.” 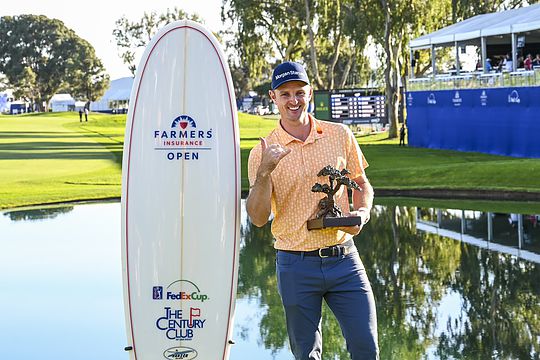 Aussie Adam Scott was runner-up posting a 68 for a 19-under par tally, which included four birdies in his last four holes to pile the pressure on Rose.

“If I can keep this form going over the next few months, and I’m in good for the Players and the Masters, I’m going to be play some really good golf,” said Scott.

Rory McIlroy signed off for a 69 to share fifth place at 14-under par alongside a resurgent Jason Day, who moved up eleven places following his final round 5-under 67.

Fellow Queenslander Cameron Smith also enjoyed a superb final round closing with a share of 9th place with a 7-under 65.

Tiger Woods stormed home producing five inward birdies in a 67 to share 20th place at 10-under in his first event of the new year.

“It was good to finish in double-digits as I was talking about yesterday, so it felt good,” Woods said.

“That was the goal starting out the day, and after three-putting there at 6, wasn’t ideal. I still had one par 5 left, but I had a birdie at 8, birdied 9, so the goal was to shoot something that got me into double digits and I did.

“I’m very proud of that. Got to have these little goals when I’m not in contention to win a tournament, but still something positive to end the weekend and the week on.”