Western Australia’s Whitney Hillier has fired back-to-back rounds of 65 to close out the Skafto Open in Sweden in a share of 8th place.

Hillier’s best finish of the season left her six strokes behind France’s Pauline Roussin-Bouchard, who secured her maiden Ladies European Tour title in just her second start, winning by a stroke over Argentine’s Magdalena Simmermacher and Swede Linn Grant. 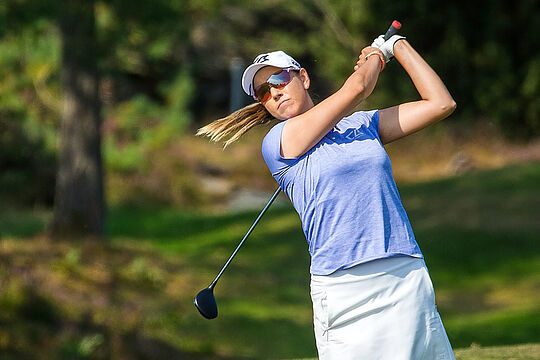 Sunday’s trophy didn’t come easy for Roussin-Bouchard but a final round of 1-under 68 was enough to claim the victory.

“I played great golf but the putts weren’t going in, and when you see other people making birdies ahead of you it was quite stressful,” said Roussin-Bouchard.

“But I always say ‘it’s all about the finish’, and I made a birdie on the 17th so it definitely was all about the finish. I had three birdies on par-threes, I really learned to play them with this wind because it was pretty much the same everyday, so I knew how to play it on 17 and I just went for it.”

Routsin-Bouchard now has her sights set firmly on the LPGA Tour and has gained an exemption straight to the second stage of LPGA Q-School because of her season-ending top-5 position in the Golfweek/Sagarin College Rankings. She finished fifth after a sophomore season in which she won four times individually, including at the SEC Championship.

Roussin-Bouchard was a former world No. 1 amateur, having spent 34 weeks in the top position in the ranking from January to August 2020. Her last amateur victory came at the European Ladies’ Team Championship in June at Royal County Down in Northern Ireland, with the French National Team.

Steph Kyriacou recorded a share of 10th position to finished next best of the Australians behind Hillier.