As was the case last year, the final proved to be a cliffhanger with the match hanging in the balance at 2-all after Rebecca Sykes and Jovanna Bozanic for Royal Adelaide, and Lyn McGough and Ebony Heard for Kooyonga had won their respective matches. 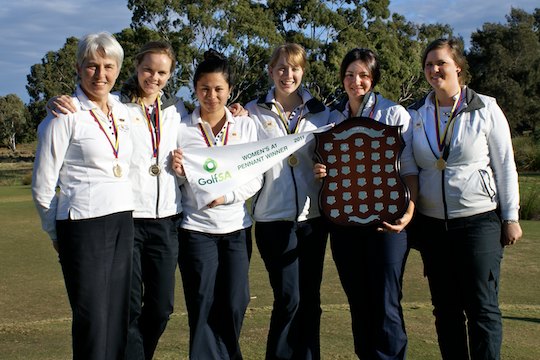 The title result hinged on the penultimate match pairing of Caitlin Roberts (Royal Adelaide) and Emma Ash (Kooyonga), with the match sitting all-square after the 16th hole.

It was Roberts, who was to take a vital lead on the 17th however, with Ash finding trouble off the tee and being forced to take a penalty drop. Unable to recover, Ash conceded the hole and the match headed to the last with Roberts 1-up.

Both players safely found the fairway and the green on the 18th, with Ash being unable to convert a tricky birdie putt to take the match into extra holes.

Royal Adelaide’s other points came courtesy of Rebecca Sykes, who was too strong for Rachel Fry winning 3&2, and Jovanna Bozanic, who defeated Amy Zhou 2&1.

For Kooyonga, Lyn McGough recorded a comfortable 6&4 win over Meegan Bleeze while Ebony Heard again showed her class in a 4&3 victory over Sarah King.