Royal Melbourne has taken out the division one men’s title in the Victorian metropolitan pennant competition, while Huntingdale took account of an unbeaten Commonwealth to win the women’s flag.

Royal Melbourne’s 5-2 victory over Metropolitan at Victoria is the first Division 1 Flag for the club since 1931, a period of 88 years in the making. 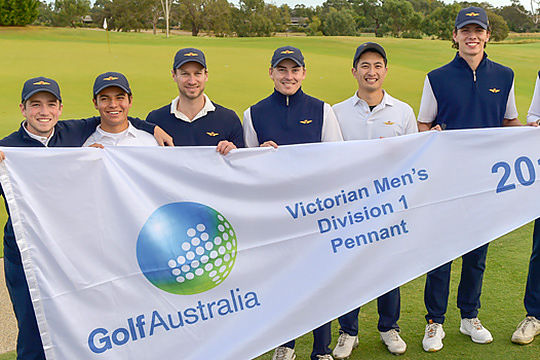 When Edward Donoghue, playing number 6 for Metropolitan, responded with a 4&3 win over Sean Ong the ledger was all square. David Shimmin at number 5 for Royal Melbourne put his team momentarily in the lead with a 2&1 win over Adam Tsiamis but Lukas Michel at number 4 for Metropolitan secured a vital 3&2 win over Harrison Gilbert.

At this point the two teams had two matches each with the top three matches being evenly contested.

James McMillan playing number 3 for Royal Melbourne was brilliant in securing his 3&1 win over Aiden Didone, which was the momentum changer for his team.

In the women’s final, Huntingdale secured a dominate 5½-1½ victory over Commonwealth through strong efforts from its lower order with Kallista Do and Trinity Francis winning their 7th and 6th matches which underpinned the team’s victory after Helen Gubbels, Lisa Teo and Beneath Wong all went onto secure match wins.

The result was the reverse of last year’s final and the Commonwealth team was shaken by it having gone through the season undefeated and only securing one match win in the final with their number 5 Kim Kennedy beating the Huntingdale captain Emily Smith 3&2 at the 16th hole.