Royal Perth have won their 21st Men’s Pennant title and the first since 2007 defeating Royal Fremantle in a 5&4 victory at WA Golf Club.

Played over 36 holes of match play, Royal Fremantle had taken the lead after the opening 18 to be leading in 7 of the 9 matches. In the afternoon session Royal Perth dug deep to secure a narrow victory. 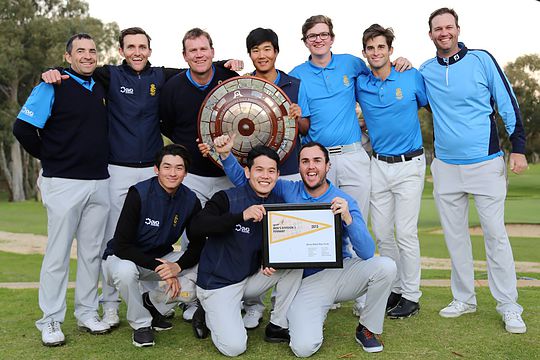 Playing number 9 for Royal Perth, Tim Burd went down to Hayden Hopewell, 8&7, yet Adam Hatch at number 6 equal the ledger with a 4&2 win over Alan Becker.

Brett Roberts at number 7 for Royal Fremantle edged his team in front with a 2-up win over Mathew Lord, but Andrew Monk was able to balance the match for Royal Perth with a 3&2 win at number 6 over Scott Redman.

The top-order matches were equally hotly contested which saw Royal Perth securing win in matches 5 through to 3. Ray Chow won his match against Connor Faulds, 1-up on the 37th hole, Robbie Morrison was too strong at number 4 winning 5&3 over Fritz Arnold.

The number 3 match between Royal Perth’s Joseph Ha and Royal Fremantle’s Cameron Jones was another to require extra holes, with Ha winning 1-up on the 38th hole.

Dennis, the team’s captain, was the only playing member from Royal Perth’s last victory in 2007, and he credited the team’s younger players for their win.

“It’s a bit hard to remember ’07 because it was so long ago, but this win was good because we had some new young people play really well. Especially Fred Lee, Robbie Morrison, Joseph Ha Ray Chow and Monkey (Andrew Monk). It’s good to see all them boys stand up and pull it off.”

Dennis also recorded a hole-in-one on the 19th hole, yet was not able to stop Min Woo Lee.

“I was seven down at the time so I was just trying to get it on the green and not go eight! I hit a 3 wood, little bit to the left and it just sorta cut back in.”

“It felt good but I was just trying to stop the bleeding!”

While Royal Perth celebrate their Men’s pennant win, Royal Fremantle Junior’s had a 4-3 win over Royal Perth in the Division 1 Boys’ final.

In Division 2, Melville Glades secured a return to Division 1 with a 5.5-3.5 win over Lake Karrinyup while Nedlands earned promotion from Division 3 by beating Meadow Springs by the same margin.