The PGA of Australia has confirmed the Australian PGA Championship has found a new home on Queensland’s Gold Coast at RACV Royal Pines.

Following an extensive search within the Sunshine State where a number of competitive offers were considered, a series of new agreements will now see Australia’s oldest Professional Championship contested on the Gold Coast for the next five years. 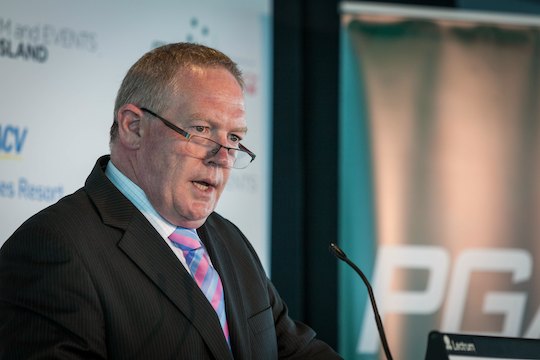 “This is a significant and exciting day in the history of the Australian PGA Championship,” said Brian Thorburn, CEO of the PGA of Australia.

The Australian PGA Championship holds great importance to the entire PGA Membership, and the relocation to RACV Royal Pines on the Gold Coast now provides us with the required assets to grow the tournament.

“With a significant population base and its natural tourism appeal, we now have a wonderful opportunity to attract increased interstate and international visitors to the region.”

“The Australian PGA Championship has a reputation for being a fun, relaxed tournament and we think we have the opportunity to not only recreate, but enhance that at RACV Royal Pines.”

“We’d previously had feedback from a number of potential sponsors that they would be interested in key sponsorships if the tournament moved to a region with a larger population base, so we’ve now put the event in the best possible position to reach new heights in terms of entertainment value, prize money and commercial opportunities.”

The proud home to the Ladies Masters since 1992, RACV Royal Pines is no stranger to hosting world-class tournaments and will be investing $5m over the next three years to make changes to the course that meet the PGA’s requirements.

The Australian PGA Championship was last contested on the Gold Coast at Surfers Paradise (1970 and 1971) and at Burleigh Heads (1975).

2013 will mark the first time in over 10 years that the PGA Tour of Australasia has staged a major tournament on the Coast, the last being the 2001 Australian Open at The Grand, won by Stuart Appleby.