Antoine Rozner raised the French tricolours to the top of the European Tour mast for a third time this year with a sensational maiden Tour success in capturing also the inaugural Golf in Dubai Championship presented by DP World.

The 27-year old Parisian came from four shots back of overnight leader Andy Sullivan to win by two shots with a closing round 65 for a 25-under par tally on the Sergio Garcia-designed course at the Jumeirah Estates in Dubai. 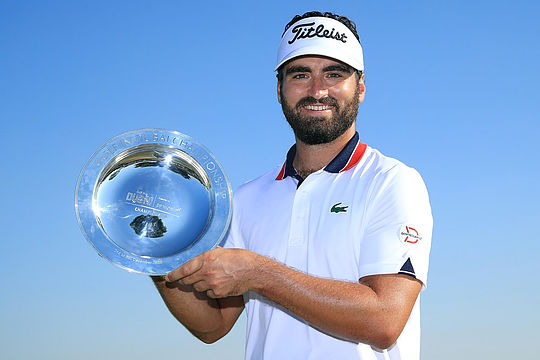 Englishman Sullivan had led from the outside and was still two strokes ahead of Frenchman Mike Lorenzo-Vera as he reached the homeward stretch.

However, it was Rozner, in his maiden main Tour season, who grabbed a hat-trick of birdies from the ninth to close the gap to one and then sensationally nosing in front with an eagle at the par- 5 13th.

Sullivan’s chance at a second Tour win this year ended when he bogeyed 16 and then missed the green left at the last in a round of 70 to share second at 23-under.

Rozner becomes the 14th first time winner on the 2020 Race to Dubai in his 24th appearance in a stellar rookie year for the 27-year-old.

What’s In The Bag: Antoine Rozner

“It means a lot. It’s been such a strange year, we have been through so much all over the world and to be able to get it done in such nice fashion, eight under, it’s amazing,” Rozner said.

“I’m going to be very honest with you, the first time I saw I was in the lead was when I was on the 18th green so I didn’t really look at the leaderboards.”

“I knew the game was there. I didn’t know it was that good but I’m excited. I knew I was in the final (DP World Tour Championship, Dubai) already, it’s just a good way to finish the season. The biggest tournament of the year.”

“I didn’t play any Rolex Series events this year so to be able to play such a big tournament will be a big thing for me, so I’m excited.”

He is also the third Frenchman to win on this year’s Race to Dubai schedule after Joel Stalter captured the Euram Bank Open, which was just the second event following the lifting of the lockdown, and Romain Langaesque won the Wales Open.

Scott Hend was the lone Australian in the field again this week. The Queenslander missed the cut and with it any chance of securing a miracle finish to play his way into this week’s season-ending DP World Tour Championship.