The Perth native, who plays out of Mount Lawley Golf Club, reeled off two birdies in her opening nine holes before putting the pressure firmly on Scotland’s Hannah Darling with another four birdies on the back nine including at the 18th hole, which was enough for an unlikely one shot victory over Darling and England’s Emily Toy. 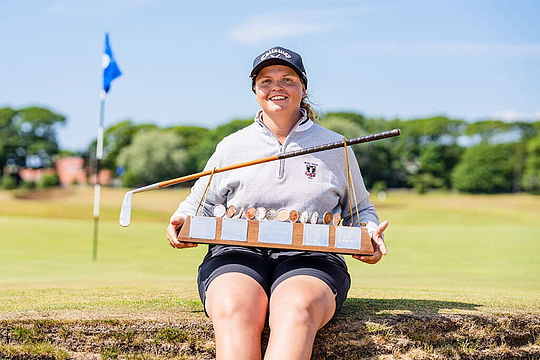 “Getting an international win was definitely on my bucket list and to see my name on such a great trophy means a lot,” said Rudgeley, who became the first Australian to ever win the title.

“I did feel good coming into the last round. I knew I needed a low one and I was able to do it so that’s great.”

“I drove the ball straight and holed a few good putts when I needed them. That’s what you have to do and that’s what got me over the line.”

“Winning is always awesome but claiming an international victory means even more.”

In 2020 Rudgeley won the Western Australia Amateur and Port Phillip Open Amateur and this year has now seen her claim another three titles including the Rene Erichsen Salver and the recent North Shore Classic in New Zealand.

It’s fair to say that she’s in the form of her life and with another international victory under her belt, her confidence is sure to be sky-high heading into her next event.