Hopewell, from Royal Fremantle, was victorious on the 36th hole winning the match 1-up after a tight match against Mount Lawley’s Jordan Jung. 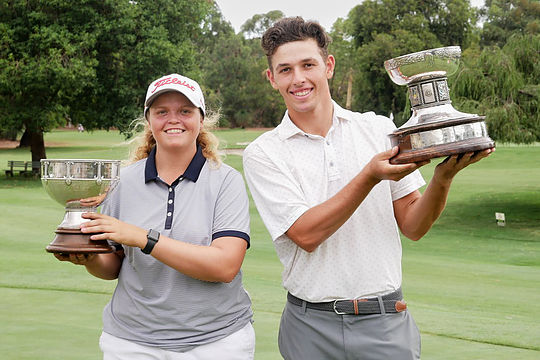 The stroke play title under the Sir Charles Gairdner trophy was awarded to number one seed Haydn Barron, winning the stroke play element over Hopewell by a stroke.

“I got on a roll and had four birdies in a row which pushed me out in front,” said Rudgely in her post match interview with WA Golf. “But Kat came back strong in the next 18. I putted around the hole really well when I needed to, and I managed to do the right things at the right time to keep me in the game.”

Jung and Hopewell were very evenly matched with Jung managing to hold the lead for the majority of the final. Coming up the 36th hole the pair were all square before Hopewell stiffed his approach shot to three foot from the hole.

“I was thrilled and relieved I managed that sixty metre shot into the pin,” said Hopewell. “Jungy was in the greenside trap and unfortunately thinned his shot out into the bunker on the other side. To be left with a three-footer for the win was very exciting.”

The win is the third title for nineteen-year-old Kirsten and her second consecutive win. Hopewell previously has collected the 2020 Tasmanian Open and is a former WA Junior champion.

“My game has changed since my win last year. I feel stronger, more confident and making the distance. The parts of my game I have been working on seem to be coming together. I never used to be able to make birdies like I can now.”

“Huge thanks to all the supporters and especially Mum and Dad, and Ben for coming out. Thank you Kathryn for a great game and Melville Glades Golf Club for sharing their course.”