Ruffels all set for pro debut at Gainbridge LPGA

Former amateur star Gabi Ruffels announced to the world just two weeks ago that she was turning pro.

And now with the return of the LPGA Tour, she gets the chance to test her game alongside the best in the world at this week’s $2 million Gainbridge LPGA at Lake Nona Golf & Country Club in Florida. 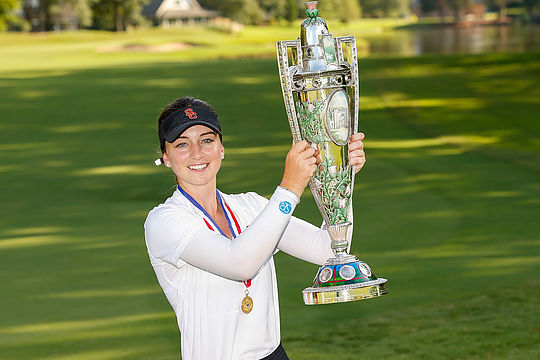 Ruffels was the first Australian to win the US Women’s Amateur (Credit: USGA)

It’s not the first pro tournament for the 2019 US Amateur winner. She impressively finished inside the top-15 at the ANA Inspiration and US Women’s Open in 2020 – both of them majors.

Ruffels knows that it’s important not to get overawed by the situation.

“Definitely sticking to my game, what I know works for me. I feel like there is no reason to really change things up,” Ruffels told the LPGA Tour.

“I’ve been able to have some success last year playing in a couple pro events, so nothing changes. I guess just the title. I don’t have a parenthesis next to my name, so that’s about it.”

The 20-year-old will tee off tomorrow alongside Americans Gerina Piller and Lindsey Weaver.

“I don’t really set goals. I just like to be out here and I always feel like I’m learning when I’m testing my game against the best in the world,” said Ruffels.

“I feel like you can’t really control how you do…know that you’re good enough to be out here and trust yourself and have fun.”

She will join fellow Aussies Katherine Kirk, Sarah Kemp and Sarah Jane Smith in the field alongside one of the biggest names in the history of women’s golf, Annika Sorenstam.

The Swedish superstar, and owner of 72 LPGA titles, is making her first tournament appearance in 12 years but has been adamant about her return not being labelled a comeback.

So why here, why now? Well, Lake Nona is her home course and now that she is qualified for the seniors tour, the 50-year-old needed to get a few tournament rounds under her belt before attempting to play the US Senior Women’s Open.

What does Sorenstam think of her chances this week?

“Shooting around par I think will be a good thing for me,” smiled Sorenstam.

“I’m going to obviously do the best I can. I think the biggest difference nowadays is I’m just not as consistent as I was.”

“I’m good for 14 holes, and I don’t know what’s coming the other four. It’s a little more surprise on the course.”