Gabriela Ruffels has recorded a top-10 finish at the Murphy USA EL Dorado Shootout on the Epson Tour finishing at 5-under-par and six strokes behind eventual winner American Britney Yada. 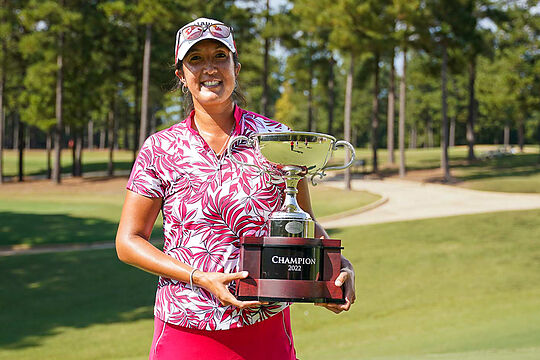 For Yada it was her first Epson Tour victory and well earned having needed to make up a five stroke deficit and starting in a share of sixth entering into the final round.

“It’s been a long journey. I turned pro in 2013 so it’s about time something good has happened,” said Yada.

“I am still in shock, I think. It feels amazing. All the hard work is paying off, finally. I have a lot of confidence heading into the last two events.”

Yada entered the tournament having missed the cut in three of the previous six stops. She tied for 32nd in the Guardian Championship at the previous stop. Her best finish this season was a pair of ninth-place showings.

The two-stroke win over Bailey Tardy put Yada US$33,750 closer toward her goal of earning an LPGA Tour Card as one of the 10-top money earners of the Epson Tour season. The El Dorado Shootout has the third-largest purse on the Epson Tour. Competitors shared a US$225,000 prize pool.

The Epson Tour has two events remaining with the Tuscaloosa Toyota Classic starting 30th September with a prize purse of US$200,000 and the Epson Tour Championship 6th October with a US$250,000 purse.

Grace Kim solidified her place inside the top-10 to earn an LPGA Tour card with a 20th place finishing while Robyn Choi was the only other Aussie to make the cut and closing ina share of 22nd place.