Ruffels quickly proves his worth at Zurich Classic

(New Orleans, LA:) It took Australian Ryan Ruffels just three holes to prove his worth in pairing with American Kyle Stanley on day one of the Zurich Classic in New Orleans.

Ruffels, who turns 19 on Saturday, gelled superbly with his 29-year old partner combining to shoot a six-under par 66 in the alternate format in glorious conditions on the TPC Louisiana course. 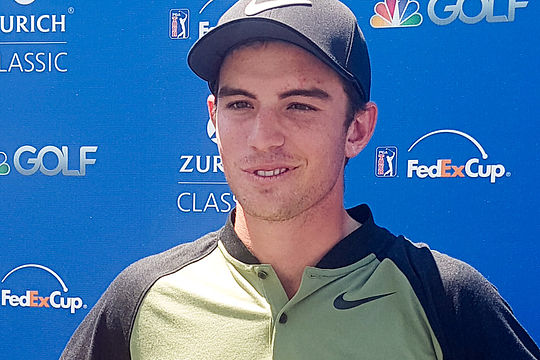 The duo birdied the opening three holes and with Ruffels, in only his second PGA Tour event this year, grabbing the birdie hat-trick in sinking a 23-footer at the par four, 12th hole that the pair were playing as their third.

They dropped a shot at the 17th or their eighth but quickly regained forward momentum with back-to-back birdies at their 11th and 12th holes with Ruffels holing a 10-footer for birdie at their 12th.

It was Stanley, the winner of the 2012 Waste Management Phoenix Open, who took the team to six under for the first time after making an 8-footer for birdie at their 14th hole however it was Ruffels that had them at seven-under when he holed out from just three-feet at the par five seventh hole or their 16th.

However after Stanley played a poor shot well right of the par three, ninth hole or their 18th, Ruffels left his second some 21-feet shy of the flag stick from where Stanley missed the par attempt.

Despite the closing bogey both players were still very happy to have dove-tailed so well and with Ruffels very impressed with Stanley, some three years after first meeting the American in Melbourne when they were grouped during the 2014 Australian Masters.

“I thought I hit it well until I saw Kyle start hitting the ball. That was pretty impressive,” said Ruffels.

“He hit a lot down the pin. I’ve been putting very well lately, so he gave me a lot of opportunities, and I was able to roll some in, and I struck it quite well, as well. Yeah, we just combined really well.”

“He told me a couple days ago when we played on Tuesday, let’s try and play boring golf, and for the most part that’s what we did, we hit a lot of greens and we were able to roll a few in.”

It was Bud Martin, Executive Vice President of Golf at Wasserman Media Group and manager to fellow Aussie Jason Day, who suggested Ruffels may wish to team with Stanley in New Orleans.

“Bud came to me a couple months ago and said that Kyle might want to play with me, and I met Kyle in Australia,” said Ruffels.

“Kyle had come out and played the Australia Masters. I think we played in about the third round. We got along pretty well, and it’s just nice of him to take me under his wing a little bit and invite me to play with him.”

Stanley took up the story saying: “Well, like he said, we played together for the first time I think at the Australian Masters. He couldn’t have been 16 years old maybe, and I was just really impressed, really nice kid, great player.”

“We share the same management company, so I reached out to Bud and Brad and they kind of set us up, and I thought it would be a good fit. He hits the ball really long, really well, good putter, so not a whole lot of weaknesses in his game”.

That is not the only connection already working well this week for Ruffels as caddying for the Victoria Golf Club attached Ruffels is fellow Australian Simon Clark, who was the long-time caddy to Japan’s Ryo Ishikawa.

And there was another “Down Under” link as also waiting to congratulate Ruffels after the round was the highly renowned Melbourne-based Denis McDade.