Ruffles moves on Sinnott at Riversdale

A third round 6-under-par 66 by Ryan Ruffels sees him just four strokes from the leader, Todd Sinnott, heading into the final round of the Riversdale Cup being played in Melbourne.

Ruffles put on a peerless display of golf carding six birdies and a bogey free round on a day the majority of the field struggled with twelve players beating par. 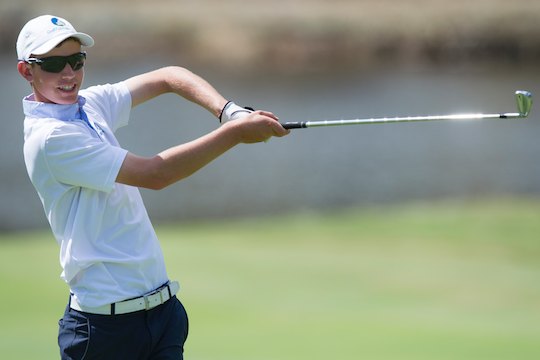 Todd Sinnott had earlier fired opening rounds of 68-65 to sit at 11-under-par and six ahead of his nearest rivals Jarrod Freeman and Lucas Herbert heading into the third round but struggled with his driving to card a one over par 73.

Freeman remains in the mix at 6-under with Ruffels after Herbert carded a 3-over-par 75.

With momentum on his side following his stellar third round, Ruffels is in prime position to win this prestigious tournament.

Ruffels, who turns 16 next month, was born in the United States, grew up in Southern California and lived there until he was 11, when his tennis legend father was appointed to coach at the AIS in Canberra.

Much has been touted about Ruffels’ talent, especially from the main golfing administration who have been quicker than normal to get him under their wing.

Yet what is most impressive with Rufflels’ game, besides his pure ball striking, is the way he plays a golf course. Ruffles displays course management well beyond his years and composes himself like a tour journeyman. This will certainly serve him well come the business end of this event.

Sinnott will certainly not give up the chance of claiming another main amateur title without a fight. His last victory was The Dunes Medal in 2011. For him a few have recently slipped through his fingers like the chance he had at the Australian Amateur last month in Adelaide where a costly tee shot on the 18th in his semi-final match against Curtis Luck denied Sinnott a place in the final.

Sinnott was scrappy during today’s third round, his tee shots not finding the fairways yet he managed to minimise the damage. That shows experience and Sinnott certainly has that as well as massive length off the tee.

Riversdale is not an overly long layout and there are many holes where the player is forced to think off the tee. This will disadvantage Sinnott as he will need to use his length with care. Ruffels meanwhile will be keeping cool and looking for a repeat of today’s 6-under-par round.

With the pair in the final group, it sets the stage for a great finish at Riversdale.