Six-time European Tour winner Brett Rumford and local Braden Becker have showed no signs of tournament rust after posting opening rounds of 7-under 65 to share a three-stroke lead at the TX Civil & Logistics WA PGA Championship in Kalgoorlie.

The 54-hole event marks the first pro-tournament since the New Zealand Open in late February. 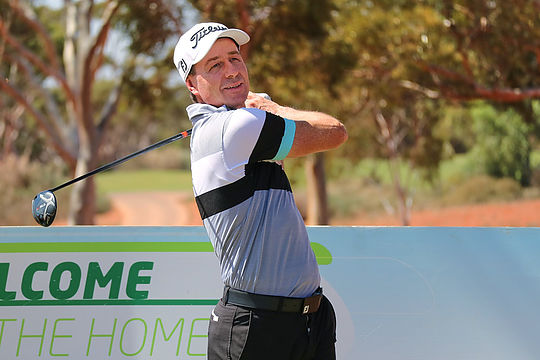 “The wind made it really tricky today,” said Rumford, who has winning form at the Kalgoorlie Golf Club having claimed the title by two shots over Daniel Fox in 2015.

“The strength was one aspect but the winds were turning constantly at least 90 degrees. Which is bizarre because we’re in the middle of the desert.”

“It definitely adds to the trickery of the golf course. It had me literally guessing all day. I was just lucky that I hit the right shots at the right time.”