Local favourite Rumford has finally won a tournament on Western Australian soil, his sixth European Tour victory coming at an important time in the 39-year-old’s career just months after he lost his status on the Tour.

“Every single year this has definitely been on my radar to come out and win. Unfortunately I’ve given up leads,” said Rumford.

“I think this win is, being in the home state, family and friends, everyone wants to win in front of home crowds and it’s so hard to do as well and it’s quite unique. So I’ve got a couple of positives there today to reflect upon I think.”

“So it’s really nice to get that back and feel as though I’ve got some worth as a golfer once again. Because once it’s all taken away, it can happen so quickly, it’s not a nice place to be.” 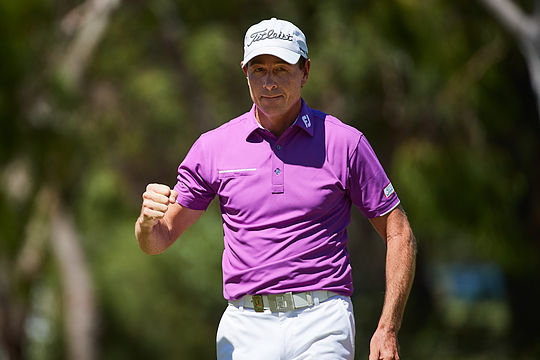 After 54 holes Rumford held a commanding five shot lead and entered the match play round of the innovative format as the top ranked seed. While it meant little bar a bye straight through to the second round, Rumford’s skill shone through to see him the inaugural champion.

“Every other player was, because we’re all competitors and we all want that number one next to our name. So I’m happy with that.

“I’m happy that obviously to come out with a win as well. So it’s a double positive for me this week.”

Rumford faced World Number 58 Hideto Tanihara in the second round, a thrilling encounter awaited in the quarter finals with Wade Ormsby which saw the pair play the shootout hole twice.

He then met Adam Bland in the semi finals where he was victorious 1up. That win ensured that Rumford was in the final where he convincingly defeated Thailand’s up and coming superstar, 17-year-old Phachara Khongwatmai in the final round of match play 2&1.

The win was extra special for Rumford with his wife and twin daughters watching on. It also comes just months after he began working with PGA Professional Gary Barter. Rumford also credited his victory to re-hiring his caddy and the work he has done with personal trainer Aaron Doyle.

“Ronnie John Roberts, the caddie that I had when I won back to back, he’s back on the bag now. So on the golf course there’s a partnership that just seems to click there. We’ve done tremendously well and this is our third win.

“Aaron Doyle got me back on my feet and from Drive360, and then after surgery that is, and Gary Barter.

“I’ve just been seeing a Gary for the last two months and straight away I’ve had some really decent performances.

“I finished fifth at the PGA (Australian PGA Championship), which was pretty much my first week with him, played with him at Hong Kong, played well in South Africa but got sick unfortunately and then here I am.

“So the game’s definitely turned around, feels good, just feel rejuvenated, got the family here and schedule has got to be key this year to continue to play well.”

For Rumford’s win he collected AUD$277,770 the winner’s share of the AUD$1,750,000 up for grabs. This shoots him to the top of the ISPS HANDA PGA Tour of Australasian Order of Merit early in the season.