Rumford wins back to back titles in Asia

Brett Rumford has become the first Australian in 41-years to win back-to-back European Tour titles after capturing the Volvo China Open at Tianjin.

The Perth-born Rumford shot a final 68 to win by four shots with a last round 68 for a 16-under par tally on the Binhai Lake GC course. 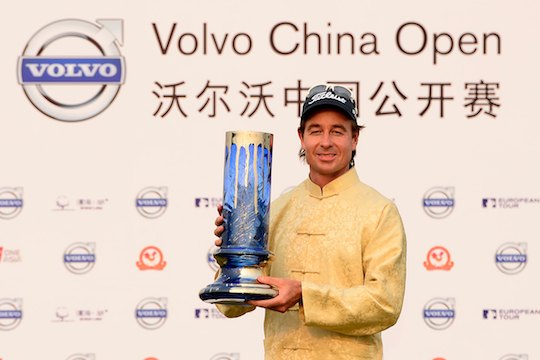 “As with my win last week I’m kind of speechless at the moment,” said Rumford.

“It’s quite surreal. It’s the first time I’ve actually played the week after a win so I’m more than pleased. It’s hard to get my head around it at the moment.”

The week had commenced on an historical note with 12-year old Chinese lad Ye Wo-cheng becoming the youngest-ever player to tee up in a European Tour event and it ended with Rumford carving out his own slice of Tour history.

The 36-year old Rumford set-up victory in holing a 45-foot putt for eagle at the par five at the par five 12th hole to break clear of Finland’s Mikko Ilonen who could manage only par to fall three behind.

Rumford then found himself six shots in front when he birdied the 13th and 14th holes while the Finn proceeded to bogey 13 and then the next.

He then dropped a shot at 15 and also bogeyed 17 as did Ilonen before chipping to within two feet for a par at the last while Ilonen secured his best finish in four years to shoot a 71 for second at 12-under par.

Rumford was not born when fellow Australians Jack Newton and Graham Marsh both won back-to-back in 1972 and the very first year of the European Tour.

“It’s quite a feat and that makes it very special so I feel very honored and special,” said Rumford.

Marsh also won the last two events of the 1977 season, the Colgate PGA Championship and the Lancombe Trophy but a Tour official indicated they were not official Order of Merit counting tournament.

And in a fortnight Rumford has moved from 253rd in the world to inside the top-80 and a jump of more than 170 places.

Rumford also secures a place in the up-coming Volvo Match-Play Championship in Bulgaria.