The 2014 Australian Open joint runner-up has endured a horror run with health issues in 2015 – including being rushed to hospital in South Africa with an intestinal blockage in March that required the removal of 30cm of his intestine – and had not played tournament golf since July’s Open Championship at St Andrews. 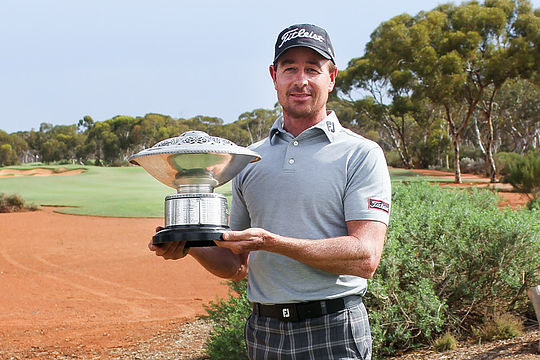 “What I have been through has been pretty horrendous all year. Seven weeks ago I had shingles for six weeks, so I have had very large periods of the year where I haven’t picked up a golf club.” Rumford said.

“It’s been a really funny year and certainly the preparation hasn’t been anywhere near where what I would have expected to go out and win a championship.”

Rumford started the day with a four-stroke lead and shot a 1-under 71 to win the title by two shots with a 16-under 272 total.

“Surprised really, I wasn’t expecting much this week to tell you the honest truth.” Rumford said.

“The golf course lent itself to good scoring, there were plenty of birdies out there and I putted well the first three rounds. Today was a tough day; it was a different wind so it was a completely different golf course.”

Playing partner Daniel Nisbet applied the pressure to his more experienced opponent during the final round but it was Daniel Fox, who fired a superb 6-under 66, who eventually finished in outright second place at 14-under the card.

“Very pleased, I have been putting plenty of hard work in. Like I said yesterday, it’s more of a mental battle for me a lot of the time.” Fox said.

“I needed a birdie up the last but I was happy with the result. Giving a quality player like Brett that many shots head start, its pretty tough to mow him down. But to finish basically in front of everyone else’, I was pretty stoked with that.”

Veteran Ed Stedman also made a charge with a final round 7-under 65 to finish tied third with Nisbet on 13-under 275, with Queensland’s Aaron Pike alone in fifth place at 12-under.

The PGA Tour of Australasia will now head to Royal Fremantle Golf Club for the Nexus Risk TSA Group WA Open from 5-8 November.