Ben Campbell has picked up where he left off at the Horizon Golf NZ PGA Championship leading the tournament after the first round.

Finishing runner-up in 2017, Campbell returned to Manawatu Golf Club, just down the road from where he grew up, in a positive frame of mind and free of expectations. 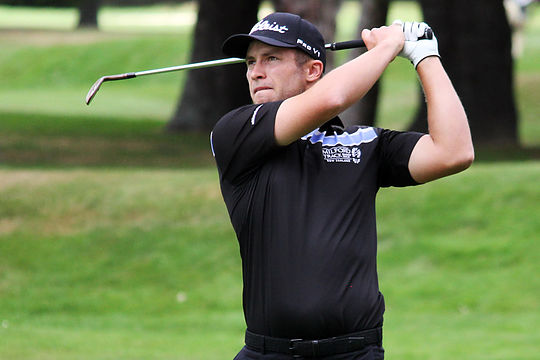 “I’ve played here a lot. So I think a week like this, you feel a bit more comfortable,” said Campbell.

“I kind of keep to myself really and don’t worry too much about what others think. But I suppose there are (expectations), but if I do what I came here to do and if it’s good enough, it is good enough.”

After a 90 minute delay to the start of the round due to flooded greens, Campbell teed off the 10th hole and with a solid start made the turn at 2-under the card.

“It was one of those days where the momentum just never stopped. If I needed to hole a putt, like on my fourth hole; I had about a six foot putt par and holed that and then just kept the ball rolling.”

On the front-9 Campbell really started to heat up, reeling off five birdies including one at the par-4 6th, which is traditionally the hardest hole on the course.

“I actually got a really good drive down there and I only had sand wedge in. I don’t really think I have ever hit a sand wedge into that hole before,” added Campbell.

“After I got the drive away, it turned a tough hole into a bit of an easy hole so it was nice to birdie that one.”

While Campbell finished runner-up at both the Horizon Golf NZ PGA Championship and ISPS HANDA New Zealand Open in 2017, he believes his game is in much better shape this year.

The work he has put into his short game already paying dividends as he went on to open the two week New Zealand swing with a 7-under 65.

“I’ve just been playing really well, this year my game feels a lot better than it has the last year,” added Campbell, who made six cuts in 10 starts in 2017.

“I’ve just really worked hard on my putting. Last year that really cost me, I shouldn’t really have missed too many cuts last year.”

“Then today I made a couple of key up and downs to keep the momentum going.”

Sitting just one shot behind Campbell is his playing partner, Simon Hawkes, who is also in excellent form having just won the Oates Vic Open.

Joining Hawkes on 6-under 65 is New Zealand specialist Matt Millar. The Canberra native is a former NZ PGA Champion having won the event in 2015 and is the current reigning NZ Masters Champion.

At 5-under the card and rounding out the top-5 on the leaderboard are Jordan Zunic, Taylor Cooper and Deyen Lawson who had the best round of the afternoon field.