An impressive final round of five-under par 67 has seen Victorian Ryan Lynch win the WA Goldfields PGA Championship at the Kalgoorlie Golf Course, his first victory on the PGA Tour of Australasia.

Starting the day six shots off the lead, Lynch took out the title by a single shot from overnight leader Daniel Gaunt of Victoria and South Australian Peter Cooke with a tournament total of 12-under 276. 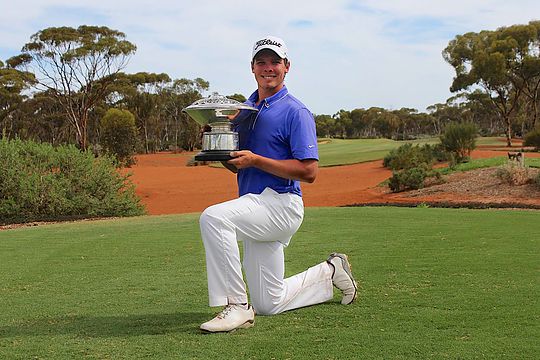 “I am on top of the moon. I am really happy to get the monkey off the back and get my first win,” said Lynch.

“My mindset today was to stay patient. I knew that I was playing well enough, if I could make a few birdies, I could climb the leaderboard.”

The 25-year old stumbled with a three-putt bogey at the difficult par-three 17th to fall behind Gaunt, only to watch on as his more experienced rival bogeyed the final two holes to hand him the win.

“I was definitely preparing for a playoff,” added Lynch, “I thought I might have been one shot short but Gaunty unfortunately did the same as me on 17.”

“To come down and get the news that I had won it outright was exceptionally good.”

It’s a special moment for Lynch and his family, his father is renowned golf coach Dale.

“I spoke to Dad as I was walking up to the driving range to let him know that I might be in a playoff,” added Lynch.

“I haven’t spoken to him since; I can’t wait to give him and my old lady a call. He will be stoked and I dare say we will be having a couple of beers when I get home. I am really proud.”

Lynch earned AU$16,500 and all-important exemption status on the PGA Tour of Australasia through to the end of 2016.

A disappointed Gaunt finished his tournament with a 2-over 74 to be tied second on 11-under the card while his playing partner Cooke (SA) finished the tournament with three consecutive birdies to share second place.

Action on the PGA Tour of Australasia returns in Sydney in two weeks time as the Greg Norman-designed Stonecutters Ridge Golf Club plays host to the NSW Open Championship.