As the second tournament of the LIV Golf Series got underway in Portland, Oregon, US Ryder Cup captain Zach Johnson dropped the strongest indication yet that the rebel players won’t be welcome in Rome next year.

Johnson was speaking ahead of his 20th appearance at the PGA Tour’s John Deere Classic, and a title he won in 2012. 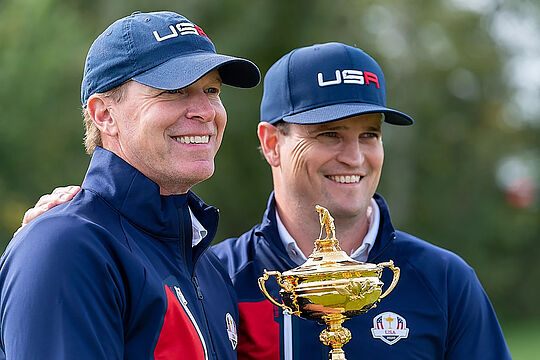 Following discussions about his long history at the John Deere Classic, the focus then turned towards his role as Ryder Cup captain and his thoughts on players qualifying for the 2023 Ryder Cup.

“First and foremost, I mean I got some friends that have decided to go that route. I want them to do well. I want them to, you know, find contentment or happiness in whatever it may be. It’s not for me to say how that develops or how they find that.”

“I will say I have the utmost respect for them individually. I would hope…that they would have the respect for me and who I stand for and what I stand for. And I don’t think it’s very secretive or outlandish in saying that I’m for the PGA Tour.”

Three players, who were likely to play in the Ryder Cup – Brooks Koepka, Bryson DeChambeau and Dustin Johnson – have made the move to LIV Golf.

Meanwhile European Ryder Cup captain Henrik Stenson has yet to make a decision about how to deal with the breakaway players. The DP World Tour utilises a different set of criteria for qualifying and has not released the details for the 2023 event.

In a press conference for this week’s LIV Golf Portland; Sergio Garcia, Martin Kaymer and Lee Westwood all indicated that they should be able to play in the Ryder Cup.

“I’ve been a member of the PGA TOUR and still played four events on the European Tour, and why would the European Tour change their rules so dramatically because another tour doesn’t like it or feels financially threatened? There’s just a bit too much protection going on for my liking and not enough transparency.”

“I think as long as you fulfil the criteria to be a European Tour member, then you should still have the opportunity to try and qualify for the Ryder Cup team.”

A lot can happen in 14 months. Legal challenges by either side could force the PGA and DP World Tours to have to incorporate LIV players. But that could also lead to animosity within the team especially between players, who have been especially vocal about either side of the argument.

“We’ll just keep our fingers crossed,” said a hopeful Sergio Garcia, who has only missed one Ryder Cup (2010) since his debut in 1999.